President Barack Obama arrived in the Treasure Coast on Saturday, March 28, and Sunday, March 29, with Air Force One landing at St. Lucie International Airport, in Ft. Pierce, to take part in a golf weekend at the Floridian National Golf Club in Palm City. Playing with the President on Saturday were  Miami Heat great Alonzo Mourning; broadcaster Ahmad Rashad, a former NFL Wide receiver; and Cy Walker, an attorney and a close friend of the president. Joining Obama on the course Sunday were Floridian owner Jim Crane, an energy executive who also owns the Houston Astros; private equity mogul Glenn Hutchins, a co-owner of the Boston Celtics; and energy titan Milton Carroll, who sits on the Halliburton board of directors. On hand to greet the President on Saturday at the St. Lucie Airport were Congressman Patrick Murphy and Ft. Pierce Mayor Linda Hudson. Murphy handed the President a bottle of water derived from the St. Lucie River, highlighting problems in the community and the river. Murphy believes the river needs federal funding for a cleanup. The President left St. Lucie County on Sunday, March 29 to return to Washington, D.C. He was in Boston, Massachusetts on Monday, March 30 for the dedication of the Edward M. Kennedy Institute. First Lady Michelle Obama, Vice President Joe Biden, and friends and family of the late Massachusetts Senator also were in attendance. 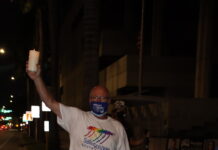 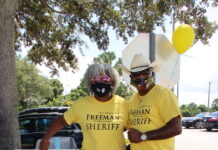