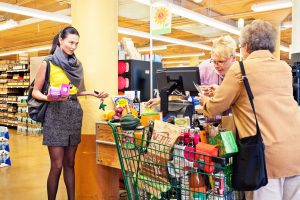 Ah, the Joys of Aging!

Well, now I’m 84, and luckily I’m in great health. I have been a widower now for nine years, and discovered I can have great fun with my age by sometimes wielding it like a weapon.

You see, one learns. I remember an incident some 20-odd years ago, when I was waiting in a long line for theatre tickets, and an old woman suddenly stepped in front of me.

“Hey!” I yelled indignantly. “There’s a line here! What, do you think your age entitles you to ignore it?”

She spun around, gave me a fierce look and said, “Yes!” Then she turned around and ignored me.

Well, I decided to try that last week at Publix. The line: for subway sandwiches. People waiting in it: seven.

I stepped in front of the woman to be waited on next and heard a, “Hey!”

I ignored her. She yelled out, “There’s a line here!”

However, the next day I had my semi-annual appointment with my internist, and I love to use my old-age health whenever I talk to her.

Dr. Sider, by the way, happens to be the best doctor I’ve ever had, and she has grown to accept my cantankerousness with some patience. A young doctor, obviously going through his residency with Dr. Sider, stood behind her (the Cleveland Clinic is a teaching hospital).

“I’d like you to meet Dr. Mathew Berman, who is working with me,” Dr. Sider said.

Young. Alarmingly young. “Dr. Berman,” I said, shaking his hand, “nothing personal, but I do not intend to consult with you until you get bar mitzvah’d.”

“Pay no attention to him,” Dr. Sider said.

Dr. Berman grinned and said, “Actually, I was bar mitzvah’d. Fifteen years ago.”

“Have you learned a lot from Dr. Sider?” I asked, neatly switching the conversation from math.

Dr. Sider said, “Mathew, don’t listen to anything he says.”

“Has she told you what the four important food groups are?” I asked Dr. Berman.

“I’d like to hear what he thinks they are,” Dr. Berman said.

Dr. Sider put her hands over her ears.

“I’m a nightmare because if all your patients felt as well as I do, you’d go broke.”

Of course, there is another side to being old that one must treat delicately, and that is how to handle grown children. Having lived through generational problems with my father-in-law, I knew my kids (who live in Chicago) had to occasionally get together and wonder about dad’s health, and most importantly, his aloneness. The trick, when you’re 84 years old, is to hear the questions your kids are not asking.

I know my kids very well. I know when they worry, and how to diffuse their concerns by giving them a hard time.

My kids live miles apart from each other, so one day I arranged to call them when they were together at my son and daughter-in-law’s house. They got on the line together.

“I think I’ve found someone I’m interested in,” I said.

I was right that this subject had been discussed. They started blurting. Together.

Unfortunately, while I had pre-empted their questions, I hadn’t prepared answers. “Well, I haven’t really approached her yet,” I said.

“Well,” I said, “I saw her going into work. I think she’s a Hooter’s waitress. I mean, she was wearing a skimpy outfit.”

“DA-ad!” Both of them, simultaneously.

“What, was she about Lexy’s age?” my daughter asked. Lexy (Alexis) is my granddaughter.

I quickly changed the subject. “By the way,” I said, “I’ve decided to make an extra trip to Chicago this year. I’m coming in for Lexy’s graduation.”

Alexis was getting her Ph.D. in psychology from the Chicago School for Professional Psychologists.

The change of subject led to elaborate plans for my visit. And the visit gave me the opportunity to demonstrate that one can use his age to ignore inhibitions.

The event was at McCormick Place, an auditorium vast enough to house ginormous events, such as concerts and auto shows. A few hundred students, decked out in caps and gowns, were receiving Master’s Degrees and Ph.D.’s; the assembly hall was packed.

After a few brief introductory speeches, they began the traditional ceremony: announce a student’s name, the student walks across the stage, receives a diploma and walks off.

Scattered applause. I stood up and shouted, “LET’S HEAR IT FOR THE ABERNIAN GENE POOL!”

My daughter-in-law buried her face in her hands. My son whispered, “Dad, sit down!”

However, I had initiated deafening applause. And an avalanche of loud responses that went on all afternoon. We heard, “That’s my daughter!” and, “He fooled us all!” and, “This don’ mean you’re movin’ ta California!”

See?  I’m not the only one who takes advantage of his age.