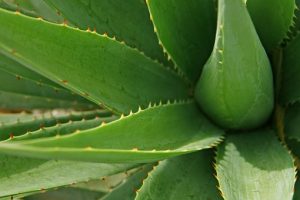 *This article was originally published in Banzai Magazine

Did you know secretions from aloe are not only good for the skin but used as laxative? There are two derivatives of aloe: the gel and the latex.  The latex is a yellow fluid secreted by the rind of the plan which is then dried and concentrated for a juice.  It can also be taken dried as a supplement.

Taking aloe internally changes the flow of water in the colon.  Instead of absorbing water, the colon gives off water.  This attributes to diarrhea.  Although because aloe is an anthranoid laxative (a class of laxatives with pigments called anthroquinones and anthrones), it can cause contractions in the colon.  Aloe also causes the apoptosis of colon cells.

It was even found to have hypoglycemic effects in diabetic rats. “Single as well as chronic doses of bitter principle of the same plant also exhibited hypoglycemic effect in diabetic rats. This action of Aloe vera and its bitter principle is through stimulation of synthesis and/or release of insulin from pancreatic beta cells,” (Kumar et, al. 2015). With information like this, we could begin studying the effects of aloe for diabetes in humans.

Aloe can even help with periodontal disease.  Because of its white-blood cell recruiting powers, it has been found to effectively combat bacteria when used in toothpaste in the mouth. “Studies using Aloe Vera in toothpastes have shown that aloe vera tooth gel and the toothpastes were equally effective against Candida albicans, Streptococcus mutans, Lactobacillus acidophilus, Enterococcus faecalis, Prevotella intermedia, and Peptostreptococcus anaerobius. Aloe Vera tooth gel demonstrated enhanced antibacterial effect against S. mitis,” (S.L. et. Al. 2015)

Aloe is a versatile plant whose uses are still being discovered. Consider using it for more than just soothing the skin.

On Feeling Burnt Out

The Gardens Mall Supports Local Charities During the Holiday Season