It’s that time of year again, it’s time to tiptoe through the tulips—ukulele is optional. While Keukenhof in the Netherlands is the motherland of all tulips with its 25-mile flower-filled road trip, tulip bicycle tours and tulip cruises, it’s not the only place to see these happy flowers. Canada, New York, and even Australia celebrate tulips with festivals. Here are four tulip festivals around the world where you can tiptoe through acres of fields blanketed with the multichromatic blooms.

Ottawa gave refuge to the Royal Dutch family during World War II. During that time, Princess Margriet was born in the Ottawa Civic Hospital. The maternity ward was temporarily declared extraterritorial by Canada to ensure the princess would have full Dutch citizenship. The Dutch showed their gratitude to Ottawa with a gift of Dutch tulips and the legacy of the Canadian Tulip Festival was created celebrating this international friendship.

Millions of tulips blanket the city for this colorful festival and celebration of culture, history and art. Experience urban tulip art creations and sample tulip-inspired cuisine while taking in the entertainment throughout the festival’s five venues. The 2018 Canadian Tulip Festival runs May 11-21.

If you don’t have time to travel across the pond to the original Holland, head to Holland, Michigan. Located on the scenic shores of Lake Macatawa and Lake Michigan, Holland has a rich Dutch heritage and knows how to celebrate it. The city’s annual Tulip Time Festival showcases five million tulips.

Holland’s relationship with tulips began in 1928 when the mayor purchased 100,000 tulip bulbs from the Netherlands. The bulbs were planted in city parks and were available for Holland residents to purchase at one cent each. When the tulips bloomed the following year, the tulip festival was born.

Today the festival is much more than flowers. Nearly 1,000 locals dress in traditional costumes and perform Dutch dances. There’s also a Dutch marketplace featuring traditional Dutch food, crafts and costumes. And there are national entertainment acts—this year the Beach Boys will be performing. The 2018 festival runs from May 13-18.

Henry Hudson first claimed the area that is now Albany for the Dutch in 1609 giving the city a long Dutch heritage. On July 1, 1948, Mayor Erastus Corning II passed a city ordinance declaring the tulip as Albany’s official flower. He also sent a request to Queen Wilhelmina of the Netherlands to name a variety as Albany’s tulip. She chose the Orange Wonder—an 18-inch tall orange tulip with a scarlet hue toward its center.

Albany’s connection to the Netherlands and tulips is celebrated each spring in Washington Park with the annual Tulip Festival. It begins with a ceremonial sweeping of the streets as a nod to days when women in Holland scrubbed their stoops and streets to prepare for festivals. The sweeping is done by local high school seniors dressed in traditional Dutch costumes.

More than 140,000 tulips in 15 different varieties are showcased across the park’s 81 acres. The festival also features local artisans selling handmade crafts, a fine arts show, live entertainment and a KidZone for families. The 2018 festival will be held May 12-13.

Tulip season is autumn in Australia–which means you get to celebrate these flowers twice a year. On their wedding day in 1939, Cees and Johanna Tesselaar sailed away from their beloved Holland on one of the last ships to leave Europe before the outbreak of World War II. In their luggage was a piece of their homeland—tulip bulbs. They settled outside of Melbourne, Australia after learning it was the best place to go to grow the flowers.

The colorful fields of the exotic flowers attracted motorists who would stop and even climb the fence to admire the tulips. The flowers became so popular the Tesselaar family officially opened their farm to the public in 1954 for a month-long tulip festival. Today their grandson, Paul Tesselaar, continues the tulip growing tradition.

The festival runs from September 15th to October 14th with various themed activities including a food, wine and jazz weekend where you can eat, drink and be merry among the brilliant flowered fields. There’s also an Irish weekend with bagpipes and dancing and children’s weeks with family-focused activities.

Have you tiptoed through the tulips lately? 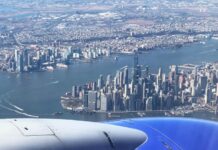 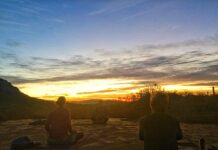