Brothers to the Rescue

A genuine act of civil disobedience is practiced by so few people these days. It allows people to demonstrate nonviolent resistance against what they deem to be unfair laws by refusing to obey such laws, demands, and commands of a government. A modern day tale of such a story involving Floridians, including a gentleman from Wellington, is conveyed in the book Seagull One: The Amazing True Story of Brothers to the Rescue {University Press of Florida, $24.95} written by Lily Prezello in collaboration with José Basulto. They presented their book at the 2010 Miami Book Fair International this past November.

Brothers to the Rescue, Inc. (BTTR), also known as

Hermanos al Rescate, began in 1991 in response to the surge of Cuban rafters who were dying as they tried to escape from the island in search of freedom in America. Basulto, founder of BTTR, was born in Santiago de Cuba, is a Cuban exile and a Bay of Pigs veteran. This courageous man, along with his friend, William “Billy” Schuss, were compelled to begin this humanitarian mission when Billy saw a report on the news telling the story of how a child, the same age as his son, died in the arms of a Coast Guard agent, after trying to flee Cuba on a makeshift raft.

Prezello does a magnificent job of chronicling the journey of these two men and everyone involved with BTTR, including volunteer pilots from 17 different nationalities; who conducted 1,840 search and rescue missions saving 4,200 lives. This book is Prezello’s first of hopefully many ventures into the book publishing business. Born in Havana, Cuba and exiled with her family to Miami in 1960, she has an outstanding reputation as a freelance writer for various magazines and newspapers in Miami and as an editor for Miami-based executives.

was the editor of Beyond The Grotto, her alumnae newsletter from her high school Our Lady of Lourdes Academy, is an English major from Florida International University, has participated in the Eckerd College Writers Conference in Paradise for the past four years, is part of the speakers bureau for the Archdiocese of Miami, has contributed to The Catholic Voice from 1987-1997 and has attended the Writer’s Institute at Miami Dade College. She and her husband Steve, along with their two daughters and grandsons live in Miami.

Many of us remember hearing stories of the rescues conducted by BTTR back in the ’90s, and we took it for granted that it was something that would go on indefinitely, or as long as it took to save as many people as possible. But it all came to an end on February 24, 1996 when fellow pilots were betrayed as two unarmed BTTR planes were shot down in international waters, murdering pilots Armando Alejandre Jr., Carlos Costa, Mario de la Pea and Pablo Morales over the Florida Straits. Basulto was flying on the day he saw his comrades shot down and made it safely back to Florida within three minutes of also being shot down. There is an understandable air of sadness when this soft-spoken man speaks of this incident. He sought criminal and civil charges over the matter and was awarded a $1.7 million judgment in January 2005 and a few months later used this money to offer a reward on information leading to the indictment of Raúl Castro on charges relating to the shooting down of these planes. His aim from the beginning was to assist and rescue raft refugees emigrating from Cuba and to support the efforts of the Cuban people to free themselves from dictatorship through the use of active nonviolence.

The book reads as a real life murder-mystery, espionage tale as BTTR 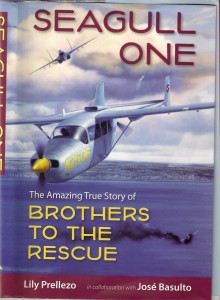 was infiltrated by two spies, one who was a double agent working for the FBI, that led to the events of that fateful day when four innocent men, three American citizens, were brutally murdered over international waters. The book tells the tales of love stories that were forged because of this group and it explains how our government was complicit in changing the Cuban Adjustment Policy to the “Wet Feet/Dry Feet” policy, which in essence doomed people to their fate.

The book also vividly describes the gallantry of all the BTTR pilots including Wellington Resident Carlos V. Tabernilla who had forty-years of experience as a pilot, worked in the agriculture industry in the Glades for over thirty years and lived in the Wellington Aero Club. His plane was called El Viejo Pancho, named after the plane his grandfather flew as a Five-Star General and head of the Armed Forces of Cuba under President Fulgencio Batista. His father, Carlos M. Tabernilla, was also a military man serving as Chief of the Air Force with the rank of Colonel and later as Brigadier General. It was on January 1, 1959 that his family escaped Cuba. Tabernilla was diagnosed with a cancerous tumor in his heart, but despite his deteriorating health condition, he continued to fly his missions. Unfortunately he passed away at age sixty on October 1, 2010, the day of the book launch party.

Basulto and Prezello were able to find time during their busy book tour to answer a few questions about their book for us.

How did the two of you meet?

Lily Prezello (LP): We have mutual friends, René and Marta Guerra. I had helped René in some writing projects and he liked my work and told me ‘you need to write the story about BTTR’. I had never thought of writing a book, so Rene invited me to meet José. We started going through the BTTR documents at a warehouse and we spent six months going through the paperwork. José then started introducing me to all the people who worked with the organization. I interviewed over a hundred people.

Can you explain the title choice?

José Basulto (JB): I am Seagull One. A seagull is a very beautiful creature. It’s usually near the coast and it’s a signal to mariner’s that they’re reaching their destination. It’s a peaceful animal and it always flies looking down, searching for something and that’s what we did. We used to fly looking down, slow, like a seagull does, on a mission of peace. I felt it was appropriate to call ourselves seagulls. Seagull Charlie, Seagull Bravo, like the letters of the alphabet according to who was the pilot and I was Seagull One (his radio call sign).

Was it frustrating at first that you had such a difficult time actually seeing the rafters?

JB: We had a pretty good idea that it was going to be difficult to see them because in 1990 we started doing the experiments necessary for the operation and we knew we had visibility issues to resolve before we announced that we were going to go out and look for rafters.

When rafters you’ve saved come up to you, what specifically do they say?

JB: I’ll tell you, I was turning a corner on 8th Street, close to LeJeune, and there was this guy in a new convertible car and this fellow was by himself with several beautiful girls and he looks at me and says, ‘Basulto, thank you’!

Can you discuss what happened the day the planes were shot down?

JB: I was flying the plane that did not get shot down. I saw the smoke in the distance where the planes had fallen. It was a hit an assassination. And I am here, alive for some reason and I believe that it is to denounce both sides for what they did that day and to tell the story. If there is no truth there will not be justice because you cannot have justice without truth. Someday, somewhere, somehow someone in the U.S. government will point the finger to the ones who made it possible for the Castro government to assassinate those kids that day.

Basulto explained that he’s now retired and Lily is working on her next book, an historical-fiction novel, based on the life of a 101-year-old Cuban-American woman.

A native of Toledo, OH and a graduate of Kent State University, Marla E. Schwartz is a Senior Writer for Miami Living Magazine and is currently a freelance writer for AroundWellington.com and Lighthouse Point Magazine. Her photographs have appeared in numerous Ohio publications, as well as in Miami Living, The Miami Herald, The Ft. Lauderdale Sun-Sentinel and The Palm Beach Post. She has had numerous plays published and produced around the country. Her short play, America’s Working? was produced in Los Angeles at both the First Stage and the Lone Star Ensemble theater companies, in Florida at Lynn University and then at an off-Broadway playhouse in NYC. Her piece, The Lunch Time Café, was a finalist for the Heideman Award, Actors Theatre of Louisville. Please check out the re-prints of her interviews with authors Dave Barry & Ridley Pearson and Dexter novelist Jeff Lindsay in the October 2010 issue of Duff Brenna’s ServingHouse: A Journal of Literary Arts at www.servinghousejournal.com. Please feel free to contact her at marlaschwartz@att.net.