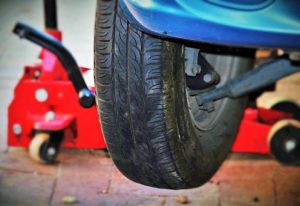 Over the years, I have used this column to chronicle some prime examples of my mechanical ineptitude:

The wall can opener I hung upside down in our first apartment in Boston; the home blood pressure monitor I put together that registered a first-time reading of 560 over 12, and many other incidents.

I thought I had just about exhausted this topic until a few weeks ago, when I was driving to a bridge game and experienced a flat tire. Suddenly, I flashed back to the year, 2005.

My wife, Carol, and I were driving to meet another couple for dinner, when my right front wheel started to wobble.

“You’ve got a flat tire!” she yelled.

“Nonsense. It takes just a few minutes to fix it.”

I pulled onto a side street, put on my emergency clickers, told Carol to get out, hopped out myself, opened the trunk, grabbed the spare tire and jack, yanked the hubcap off the flat tire and started to jack up the car.

I called BP, and after giving the dispatcher – Melanie – my name and account number, and describing where I was, I said, “I broke the jack.”

“I – I broke the jack. The handle broke off while I was jacking up the car.”

Twenty minutes later, Harvey, the service guy, showed up. He stared at my car, which to me seemed very precarious in its mid-jacked position.

Harvey took out his cellphone, hit a few numbers, and said, “Hey, Arnie, you’re not gonna believe this.” He turned his back on me as he tried to describe what happened while laughing uncontrollably.

“No one’s ever broken a jack,” he said after finishing his call. Then he went to work immediately, and it took him only five minutes to fashion a makeshift handle to jack down my car, use his own equipment to jack the car up again and change the tire.

All of this flashed through my mind two weeks ago as I pulled my hobbling car into a large mini-mart gas station to call BP.

I gave the dispatcher – now Brenda – my name and account number, and she said, “Wait! Are you the Wendell Abern?”

“You’re the one who broke the jack!”

“Yeah. Look. Can you please send someone right away? I have a flat tire.”

“So you’re the famous guy,” he said, taking out his equipment.

He laughed, and had my spare tire on in five minutes. Then he said to me, “How old is this car?”

“Okay That’s the original spare. And if you notice, on these Toyotas, they use spare tires half the size of regular ones, so they fit in your trunk. That spare is eleven years old, so go easy. Who is your Toyota dealer?”

I was in Weston. I drove perhaps ten miles, and very slowly, before my spare tire shredded.

I panicked. I called BP again, sputtering and babbling, until Brenda said, “Easy, easy. Where are you?”

“I don’t know! Someplace out where God lost his shoes! I need a tow truck!”

“Okay, determine exactly where you are, because I’m going to put you through to our call center in your area.”

I waited two minutes. A young lady with a pleasant voice and distinct foreign accent said, “How can I help you?”

“I need a tow truck! Please! I have two flat tires!”

“I’m on Sunrise Boulevard, a few blocks east of Hiatus.”

“Could you spell Hiatus, please?”

“Could you spell Hiatus?”

Reigning in my temper, I spelled Hiatus.

“And what city are you in?” she asked.

“Could you spell Plantation, please?”

“WHAT? WHAT!! Are you seriously asking me to spell Plantation?!”  What is this, a spelling bee?” Before she could answer, I said, “Listen, connect me with someone who understands me!    Now!  My cellphone is running out of bars!”

I was put on hold for seven minutes. A young man came on and before I could say anything, he said. “Sir, I was told what your problem is, but I can’t seem to find your account number in our system.”

“Sir. Sir. Please. I have it now. I see it. You’re the guy who broke the jack. Hang on. I’ll get hold of a tow truck operator; he’ll call you very soon.”

I found myself shouting into a phone with no one on the other end. I hung up, waited 20 minutes for someone to call. No one did.

I’d had it. I called Lipton Toyota, told them to send a tow truck, and they were with me in 25 minutes. Thirty-five minutes later, while I was at Lipton and waiting for them to change my tire, a BP tow truck driver called and asked if I needed help.

I hung up on him.