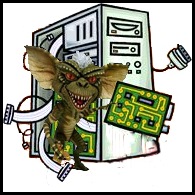 Sometimes, you simply get lucky.

I made reservations for both of my Chicago visits back in March … the second trip to occur from September 6th through the 18th:

Four days before Irma hit; eight days after it was gone.

However, traveling today becomes a hassle even before you get to the airport. Packing becomes far more selective. And if you’re traveling on a miserly airline like Spirit, as I do, you pay extra for a carry-on, extra for a seat assignment, and extra if you have to print a boarding pass at the airport.

Spirit sends a boarding pass through e-mail. Fine if it weren’t for Borbick, the miniaturized terrorist who lives inside my computer. Borbick is no longer permitting me to print from my e-mail site.

Time to call the destined-for-fame Brad. (As some readers may recall, I have advocated naming a special gene the “Brad Gene”).

“What’s Borbick doing to you this time?” he asked.

“He’s sneering at me from my new printer. I can’t print anything from my e-mail site, and I’ll need to when Spirit mails me my boarding pass.”

Brad came over and fixed it in about one minute.

“Yes. I’ve prepared a group list for my writers’ group so I won’t have to type out 30 or 40 names every two weeks. But I can’t get the group list onto my Contact site.”

Brad showed me how to do that in less than a minute.

“That’s it,” I said. “And I hope you’ve given Borbick terminal heartburn.”

Borbick dispensed with, it was time to move on to other items.

When you’re preparing to travel while listening to ominous hurricane forecasts, you take precautions. One of the smartest things I’ve ever done was to consult with my neighbor, Joan, before I left.

(When Murray – my cat – was alive, Joan cared for him during my trips. Her condo is right next door to mine, so she knows my place well.)

Joan called me the day after Irma tore through.

“We were lucky it veered to the west,” she said. “We got a little damage here, and we’ve lost power, but we’re supposed to get it back in a few days.”

I waited a few days before I called her back.

I called her the next day. “Okay now?”

“Mine already has. But don’t worry. I’ll get rid of yours, too.”

What a neighbor! I didn’t even have to start pleading!

“Joan, I really appreciate this! You know, I’ve got a big freezer on my back porch. Plus the refrigerator/freezer in the kitchen.”

“Well, when I was getting ready to come, I was a little worried about the hurricane forecasts and didn’t know how long – “

“I bought some candy.”

“Well, I was thinking … what if this hurricane really pummels us, and stores like Publix can’t get their deliveries quickly enough for Halloween? I figured I’d better stock up.”

I called her two days later.

“I’m curious,” she said. “How many kids came to your place last year?”

“The year before that.”

“Yeah. Just like me. In fact, no one has come to my door in more than ten years. And I’m sure that’s the same for you. So could you tell me why you had eight bags of chocolate-covered caramels in your fridge?”

“I wanted to be prepared. Just in case.”

“Well, the only problem I had was with the bag of chocolate caramels, which had a hole in it.”

“Yeah. I tore it open to grab a couple before I left.”

“Well, most of the rest of them oozed out and melted onto the bag of egg noodles. That made the pasta bag sticky and when I tried to yank it out, the glass shelf came with it.”

Don’t worry about it! When I told my kids what had happened, they agreed I had to do something really big for Joan.

“I know,” I said. “She’s not really my taste. I mean, I have never personally found Joan particularly attractive, but what do you think about offering sexual favors?”

“What would be so terrible?”

My daughter said, “I think you should consider giving her a Lamborghini.”

I gave her a gift card to Macy’s.

But, as you know, vestiges of Irma remained. Nowadays, when I go to my office (the condo pool), I have to weave my way between fallen branches and felled trees. However, it’s where I partake in my morning and afternoon cigars, so the trek is worth it.

However, now I’m getting ready for Thanksgiving. And I want to bring something special to my friends, Shel and Nadine Saitlin. They live in Boca and invite me up to their country club several times a year.

Thanksgiving has become very special. I bring Shel his second cigar of the year (the first one on Passover), and he and I sit alongside his pool and smoke while Nadine paints. (Nadine Saitlin has become quite renowned, is now selling her paintings for four-figure sums and is having gallery showings in several Florida cities this fall and winter.)

Last year, I brought them a plant. This year, I have decided on a big bag of sugar-free candy from my favorite store, The Sweet Shop, in Sunrise. I’ve decided on that so I can pig out on chocolate-covered caramels. After all, I’ve never replenished all those candies I lost during Irma.