Present “Write That Book Already!” and other Favorites

This couple is nothing short of gracious, good-natured, and witty. It’s true – many more delightful adjectives come to mind when describing the awesomeness of Kathi Kamen Goldmark and Sam Barry. They recently presented their book “WRITE THAT BOOK ALREADY! The Tough Love You Need to Get Published Now”, ($14.95, Adams Media) at the Miami Book Fair International.

There are many writers in Southeast Florida, particularly those who have published books, as well as those who are trying to figure out how to do it and are desperately looking for guidance. Frankly, this book is for both, but mostly it appeals to the latter. It appeals to the first group because if you don’t have time to explain to others … you can suggest this book. And to the latter, it goes without an explanation. There have been a handful of really good books written on the topic, but this one is exceptional in every possible way. Not only is it humorous, but it also includes specific details, chapter by chapter, to help you become a published novelist.

Their book should be considered the writer’s bible. The fact of the matter is that publishing is a tough racket and publishing one’s first novel is a really tough racket. And if you want sage advice that’ll help facilitate the process, then by all means this is the book for you. It begins with a forward written by Maya Angelou; Nathaniel Hawthorne and Franz Kafka are mentioned in it and even Annie Dillard is rightly so given credence. And if you think the book is stuffy because of these references – it’s not. And just in case you think it might be, just wait, read it and see. It includes juicy nuggets from authors such as Stephen King, Scott Turow, Amy Tan and Dave Barry (just in case you’re wondering – yes, he’s Sam’s brother) about their experiences in the business. 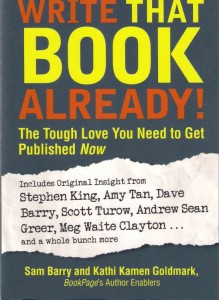 This lovely couple has been in the publishing business for over twenty-five years and they’ve been writing their BookPage (BOOKPAGE.COM/AUTHOR-ENABLERS) column for five-years so when it comes to advice on handing agents and publishers, they know their stuff.

Kathi is the author of the novel “And My Shoes Keep Walking Back to You”, co-author of “Mid-Life Confidential” (1994, Viking) and “The Great Rock & Roll Joke Book” (1997, St. Martin’s). She also produces the radio show West Coast Live (where Sam is a regular performer), which broadcasts every Saturday morning in front of a live audience. She’s also a recipient of the 2008 Women’s National Book Association Award. The WNBA honors American women who acquire part or all of their income from books or related artistic fields. She’s also the founder and a member of the Rock Bottom Remainders, (a remainder is a book that hasn’t sold and is therefore marked down to a rock bottom price), a rock ‘n roll group comprised of a few of today’s leading literary giants. You can find Kathi online at: REDROOM.COM/AUTHOR/KATHI-KAMEN-GOLDMARKand you can locate touring information and more about the group at: ROCK BOTTOM REMAINDERS.COM.

Sam has written “How to Play the Harmonica and Other Life Lessons” (which he presented at last year’s MBFI), is a professional musician and a marketing manager at a HarperOne, a division of Harper Collins. He’s also a member of the Rock Bottom Remainders and is a musician with the San Francisco group Los Train Wreck (Kathy is also a member). You can reach Sam online at: REDROOM.COM/AUTHORS/SAM-BARRY.

You can reach both Kathi and Sam at: KATHIANDSAM.NET.

As you can see these two are just about literally joined at the hip and, as a side note, both Sam (colon) and Kathi (breast) are cancer survivors!

Kathi and Sam recently answered some questions about their book just for AroundWellington.com readers:

AW: How many times have you attended Miami Book Fair International?

KATHI: The first time I came was in 1992 the year the Rock Bottom 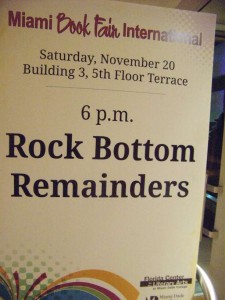 Remainders got started; and whomever Dave decides during the day to invite up onstage they become my little posse. I gather the Remainderette’s and …

AW: There are a lot of aspiring writers down here and I really believe your book appeals to them.

SAM: There are a lot of writers down here. This is truly a firmament of American letters.

AW: It’s an inspiring environment to be in. I think your book is one of the greatest books I’ve read on writing and when you referenced Annie Dillard I thought ‘how cool was that’ -because her book {“The Writing Life”, 1989, HarperPerennial) is brilliant.

SAM: Well, we try to draw on the wisdom of a lot of writers. We wanted to share some common sense about publishing. Great books have been written on the craft of writing and there are some books about the nitty gritty of the business but they’re a little dense. We wanted to bring a common sense, down to earth approach to it and make it a little bit funny.

AW: The humor adds a great quality to the book.

KATHI: We wanted to take the reader by the hand and walk them through the publishing process. This is the secret stuff that happens that nobody gets to see unless you work in the business.

AW: I liked the forward by Maya Angelou. How did you approach her about writing it?

KATHI: She and I have been dear friends for a long time, for over twenty years, and I called her up and asked her and she said yes.

SAM: Kathi and I got married, we’d lived together for quite a few years, but we got married June 12th last year, and we considered asking Maya to wed us. But she’s not traveling as easily these days, so we asked our dear friend Scott Turow to …

SAM: He was the perfect choice.

KATHI: He was more nervous than we were. We’d both been married before but this was his first time marrying people.

SAM: I was surprised that this world-renowned author, speaker and also lawyer, he’s a practicing attorney, could be so nervous. We were on our honeymoon in Paris and we got an email from Scott saying ‘don’t worry, we’re going to fix it, you’re not actually legally married yet because I forgot to sign the license’ or whatever – so he got it fixed. We’re now married.

AW: Congratulations! How did you work on this book … did you write it together?

SAM: Yes. And we write our column and our blogs together.

KATHI: We have an author’s enablers voice that’s a little different from either of our own writing so what will often happen is that one of us will start – well, with this book, we actually wrote some of it while sitting together at the kitchen computer. Other chapters, one of us would start and the other would edit and we’d go back and forth.

SAM: Commonly, one of us starts and one of us takes up the standard and it goes back and forth like that until we get it right.

KATHI: What we really tried to do with this book is take the essence of the information we give in the column and make it work in a bigger picture way.

SAM: Yes, in a grander scheme. It’s almost like a course.

AW: Yes, this would be an excellent book for college students,

particularly graduate students because many people have no idea where to go or what to do.

SAM: As you know, I work in publishing and one of my specialties is taking academic writers and turning them into trade writers, which is writing for a general audience. There are only some people who can make that leap. I mention that because I think a lot of those folks could use this book. These academics are already publishing but in very small markets of 2,000 copies on the subject that they’re expert in. We wanted to say ‘look, if you want to sell your book, here’s the game.’ Some people believe there’s a magic short cut or there’s some secret club.

SAM: There’s no secret club, I mean, of course, it’s wonderful meeting people and getting to know prominent people is part of the deal and it’s how you succeed as an author but you have to get your book published the straightforward way. You write, you show up at events, look professional, keep trying and you write a good book when the time comes.

SAM: Clearly here in South Florida you have a thriving community.

KATHI: Yes, Mitchell Kaplan is kind of the center but you need to put yourself out a little bit and show up at events and meet the booksellers and take the workshops and by the time your book is done you might actually know a couple published authors who may be happy to give you endorsements.

Thank you Kathi and Sam!

There are few couples in life that are perfect for each other. And Kathi and Sam are so much in love and they’re both such sensible and sensitive souls and also stoic survivors at all at the same time – that my hat is off to them. Please follow them on Twitter @AuthorEnablers.

A native of Toledo, OH and a graduate of Kent State University, Marla E. Schwartz is a Senior Writer for Miami Living Magazine and is currently a freelance writer for AroundWellington.com and Lighthouse Point Magazine. Her photographs have appeared in numerous Ohio publications, as well as in Miami Living, The Miami Herald, The Ft. Lauderdale Sun-Sentinel and The Palm Beach Post. She has had numerous plays published and produced around the country. Her short play, America’s Working? was produced in Los Angeles at both the First Stage and the Lone Star Ensemble theater companies, in Florida at Lynn University and then at an off-Broadway playhouse in NYC. Her piece, The Lunch Time Café, was a finalist for the Heideman Award, Actors Theatre of Louisville. Please check out the re-prints of her interviews with authors Dave Barry & Ridley Pearson and Dexter novelist Jeff Lindsay in the October 2010 issue of Duff Brenna’s ServingHouse: A Journal of Literary Arts at www.servinghousejournal.com. Please feel free to contact her at marlaschwartz@att.net.

Brighten Up Your Backyard with a Butterfly Garden: Three Easy Steps