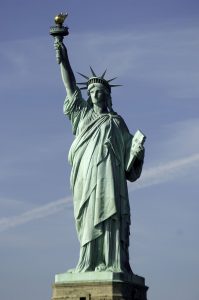 U.S. FLAG ON LEFT WALL; PHOTO OF STATUE OF LIBERTY ON RIGHT. VERY STRAIGHT-LACED WOMAN BEHIND DESK. A MAN IN SUIT AND TIE SITS ON CHAIR NEXT TO DESK.

MAN: Once again, Ms. Richards, thank you for seeing me.

GAYLE: Yes. Rob, (SHUFFLING THROUGH PAPERS) I see you’re from some new –

ROB: Yes. I am the chairman of a newly-formed sub-committee on the president’s immigration task force.

GAYLE: Oh. But – we’re the National Park Service. We have nothing to do with —

ROB: Yes, you do, Gayle. You have a great deal to do with immigration.

ROB: It’s kind of involved. Essentially, I need kind of a ball-park figure from you on … well, on time. We’re working on a timeline here.

GAYLE: A time – I don’t understand.

ROB: The president has asked us – well, asked me, personally – to look at all aspects of our immigration program. To look outside the box, if you will.

GAYLE: If I will what?

ROB: Um … it’s just an expression. Specifically, I came to talk to you about the Statue of Liberty.

GAYLE: And what does she have to do with immigration?

ROB: That was not her original intent! She was simply a gift from France! Few people realize she was meant as a celebration of –

GAYLE: Yes, yes, we know that here. Of the emancipation of slaves after our Civil War. But now –

ROB: Now she’s a magnet! She’s like an open invitation! Asking all kinds of people from all over to come join us!

GAYLE: But … she is a beautiful symbol of –

ROB: Of everything we have to change to make this country great again! You see, we don’t want her attracting immigrants! We don’t want them! This isn’t the Nineteenth Century any more! She —

GAYLE: She helped make this country great! She contributed! To our diversity! To our freedom! To our –

ROB: We are going to change her.

GAYLE: What are you talking about? We just went through renovations …

GAYLE: What? What about her torch?

ROB: It has to go. Instead, it will be replaced with her hand held up like a police officer’s, to stop traffic.

ROB: We have already contacted several architectural and engineering firms to engage in a top secret competition … asking them to submit designs and rough cost estimates on the change.

ROB: Very surreptitiously, of course. No one outside of our small sub-committee is aware of this activity. Just last week, we selected the winning design. And now that you have been informed, we would like you to contact the winning firm and come to an agreement on some kind of timeline. We’re all kind of hoping for a finishing date by the end of 2019.

ROB: Your confidentiality is imperative, Ms. Richards. You must keep this to yourself for now.

ROB: And while our full committee and a few other sub-committees are still working on the details of the Great Wall on our southern border…

ROB: You’ll be happy to know the re-designs we’re working on for the Statue of Liberty will cost only a little over one billion dollars.

ROB: More than half of that amount has already been committed verbally … by several concerned organizations and wealthy individuals.

GAYLE: (SHAKES HER HEAD, AS IF WAKING UP) Wait. Wait a minute. I get it now! This is one of Stuart’s gags, isn’t it? He’s always …

ROB: I can assure you, this is not a gag. And there’s more, Ms. Richards. We are advocating another important change. To that pathetic poem by Emma Lazarus.

ROB: Came along almost 20 years after the statue emplacement.

GAYLE: I’m well aware of when …

ROB: While it may appear immodest, I’m proud to tell you that my own revised version of the poem – albeit prose and not poetry – has been highly regarded by our full committee.

ROB: It goes, “Stop! Go back where you came from! We don’t want you. Spare us your tired and your poor! And as for your huddled masses, we have enough of our own, thank you … we don’t need yours cluttering up our landscape!”

GAYLE: Out, Mr. Amstatter. Get out.

ROB: (GETS UP FROM CHAIR) So. You think this is the end of our little talk, do you? Consider this, Ms. Richards. If one word of this gets out, we will not only vehemently deny ever having had this discussion … but we also have people who will declare you a delusional, paranoid schizophrenic and demand your immediate incarceration.

LIGHTS START TO FADE ON SCENE.

ROB: I’ll see you in a month or so, Ms. Richards … when we’ll have another confidential chat. About our plans for the Lincoln Memorial.