(January 7, 2010 Wellington, Fla.) The Challenge of the Americas is proud to announce its ninth annual international equestrian extravaganza to be held on Saturday, March 13, 2010. The Challenge, which will benefit The Breast Cancer Research Foundation, will be immediately followed by The Challenge Gala. Both events will be held at the International Polo Club Palm Beach in Wellington, Florida.

All performances will be executed at the level of the grand prix, the highest echelon of the sport.

Following the performance, the festivities will continue at The Challenge Gala with dinner, dancing and the awards presentation. The past nine years have been an incredible journey,” said Co-chair and Founder Mary Ross.

“My mother, who died of breast cancer, was my inspiration for this event; I wanted to do something extraordinary in her memory. I am so thankful to each person who has helped transform The Challenge from a luncheon performance with three horses into the international exhibition it is today.”

Committee organizers expect several thousand people to attend this year’s dressage performance. They anticipate the gala will once again sell out well in advance.

The Challenge of the Americas

Ira and Laura Lassman-Play for Pink

The Challenge of the Americas Schedule of Festivities

General Admission: To watch The Challenge of the Americas from the field:

Gala VIP Tickets: To watch The Challenge from the stadium while enjoying cocktails and hors d’oeuvres plus attend the gala with dinner and dancing at the International Polo Club Grand Marquee: $250. For reservations, please call Mary Ross at (561) 852-2591.

The Challenge of the Americas, known throughout the equestrian world for its spectacular performances on horseback, returns for its ninth consecutive year to continue its fight against breast cancer. This annual fundraiser of musical freestyles, team quadrilles and jumping is a one-of-a-kind team challenge that highlights the Olympic sports of Grand Prix dressage and show jumping. Competing riders include the “Who’s Who” of the top dressage competitors in the United States, Canada, Latin America and Europe. www.challengeoftheamericas.com

The Breast Cancer Research Foundation® was founded in 1993 by Evelyn H. Lauder as an independent, not-for-profit 501(c)(3) organization dedicated to funding innovative clinical and translational research. A minimum of 85 cents of each dollar donated to the Foundation goes directly to breast cancer research and awareness programs. The Foundation has received the highest rating from Charity Navigator, four stars, for eight consecutive years, which means BCRF has outperformed over 99% of more than 5,400 evaluated charities in efficiently managing its finances. Additionally, the Foundation received an “A+” rating from the American Institute of Philanthropy. For more information, visit www.bcrfcure.org or call toll-free 1.866.FIND.A.CURE. 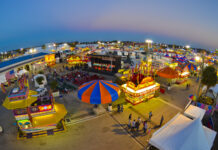 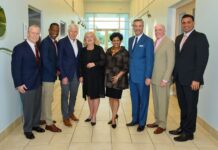 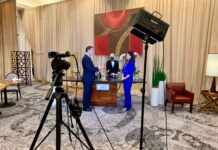 POPPING PROSECCO WITH THE PRESIDENT OF IMPACT 100 PALM BEACH COUNTY