(WEST PALM BEACH, Fla.) – Mayor Jeri Muoio will be onsite at Clematis by Night on Thursday, March 21 to personally thank the community for their support over the past eight years. While Mayor Muoio won’t officially leave office until April 4, 2019, the celebration is the last Clematis by Night of her term. The weekly concert series takes place on Thursdays at the Palm Stage near the Great Lawn (on North Clematis Street, just west of Flagler Drive) but is cancelled on Thursday, March 28 due to the Palm Beach International Boat Show. For locals looking to say goodbye to Mayor on March 21, the concert runs from 6 – 9 p.m., and Mayor Muoio will address the crowd at 7 p.m. 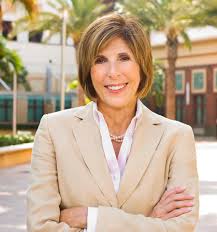 “It has been an honor to serve the City of West Palm Beach for eight years,” said Mayor Muoio. “I look forward to the opportunity to personally thank our community for their continued support, partnership in problem solving and the genuine character they have displayed. I am grateful for the opportunity to have served for two terms on behalf of the residents in what I believe is the greatest city.”

Mayor Muoio, who is term limited, ran initially in 2011 on what came to be known as the J.E.R.I. Plan – an acronym for “Jobs, Environment, Reorganization and Integrity.” Her leadership has brought forward successes in each of these categories, most notably with the strong economic resurgence in West Palm Beach – which has created jobs and a vibrant business climate; creation of the Office of Sustainability; establishment of the Flagler Financial District; creation of the Mayor’s Village Initiative – to engage African-American boys and young men in the City’s North End; lowest crime rate in 20+ years; and an emphasis on placemaking and public spaces; the award-winning Clematis Streetscape project, which is one example of her leadership of putting people, instead of roads, first. Prior to her election as Mayor, Mayor Muoio served on the West Palm Beach City Commission for four years and was reelected twice by the voters.

“Clematis by Night has been the place for our community to gather and celebrate for nearly 25 years,” said Mary Pinak, Community Events Manager for the City of West Palm Beach Department of Parks and Recreation. “We are honored Mayor Muoio has chosen this event to spotlight the success of her term and show gratitude to our residents who looked to her leadership for nearly a decade. This will surely be an extra special Clematis by Night.”

Wonderama, a five-member group from South Florida, will be performing current Top 40 and dance music tunes during the weekly concert series. The group is known for a “one-of-a-kind” sound, as they fuse the most popular songs with current, live DJ dance music production.