Everything Sci-Fi & a Little Astronomy

Stargate Universe is the newest series in the Stargate franchise. It has the same premise as the others as far as the main object of the show, which of course is the Stargate. The new series takes place parallel to where Stargate SG1 ended and even has a couple of the main characters make appearances.

The new show promises to be a good sci-fi adventure, a little more edgy than its sibling shows with a little bit of a Battlestar Galactica feel. Following are a few key factors of Stargate Universe, or SG-U, and how they have developed so far.

There is a wide variety in the character line-up of SG-U; there is quite a repertoire of different ideals and morals. As the show progresses we are sure to find out much more about each one.

In the beginning of the show we had already seen the heroics of some who even sacrificed themselves for the good of others. But we will see others turn out as villains as well. All in all, the characters in SG-U won’t disappoint and they should keep developing as the series unfolds.

The series takes place mostly on a very old ship called the Destiny that is from the Ancients (very advanced beings that existed millions of years before). The crew ended up there by accident, or so it seems.

They were on a planetary base that was under attack and to escape they went through the Stargate thinking they would be transported to Earth. Instead, they were taken to this ancient ship that is on some kind of autopilot and in need of serious repairs.

As they travel in the Destiny they make stops at different planets as they search for supplies and materials for the ship. They can also travel to Earth temporarily by means of an ancient technology device that allows the user to switch minds with another body that can be millions of miles away.

The Destiny is a ship millions of years old and it holds within it some incredible technology that is far more advanced than what we know on Earth.  As if the Stargate alone wasn’t an amazing device, in this series there will be far more to discover as the crew uncovers new wonders left by the ancients.

The way the ship functions couldn’t begin to be imagined in our time here on Earth. It can ‘jump’ through space going millions of miles in a matter of seconds.

The Destiny may be old and decrepit, but it is an awesome piece of machinery. Even in its state of decay it can still travel all over the universe and keep itself going. Who knows for how long it has been traveling on its own before the human crew boarded it and where it has been.

Stargate Universe is a good continuation to the franchise. Although the general feel of the show is very different from Stargate SG1 and Stargate Atlantis, it holds its own. It offers a raw and dramatic turn, which compares to Battlestar Galactica, but still holds the Stargate nostalgia within it.

Stargate Universe can be seen on the SyFy Channel every Friday at 9:00 pm EDT. For more info visit the website at: www.SyFy.com/universe/

Sky events to watch for this month, November 2009:

The Full Moon will be on the 2nd, we will see it in Last Quarter on the 9th and then the New Moon will happen on the 16th.

The Globular Cluster M15 in the Pegasus Constellation is a good sight for November. Looking towards the high south, this globular cluster lies just to the upper right of Enif, the giant and brightest star in the Pegasus Constellation. Pegasus is the big square shaped constellation found overhead in November at about 9:00 pm. M15 can be easily spotted with binoculars as an elliptical ball of light; it’s not quite visible with the naked eye.

The Pleiades come back to sight in November; look for them towards the eastern sky. The Pleiades, or the Seven Sisters, are a cluster of stars whose brightest ones form a small dipper-like shape. They can easily be seen without binoculars, but when viewed with magnification much more detail becomes apparent.

The Orion Constellation, aka the Hunter, is one of the easiest to spot in the sky, with its three stars in the middle, or the ‘belt’, it can be seen even from bright city locations. In dark skies it becomes a beautiful sight when all of the constellation’s stars become visible. A fuzzy patch below the three stars can also be seen, which is Orion’s nebula. Much more detail can be seen when the nebula is viewed through a telescope.

Orion follows not too far behind the Pleiades, rising in the east between 8:00 and 9:00 pm EDT and getting higher in the sky between 10:00 and 11:00 pm, when it can easily be spotted by finding the signature ‘belt’ trio of stars.

The visible planets for November are still dominated by Jupiter. The bright planet continues to be easily visible all night, although it is slowly moving to the west earlier. Mars is rising earlier at about 12:30 am EDT and it is also visible before dawn high in the eastern sky. Saturn is now visible low in the east at around dawn as well. Mercury and Venus become out of sight for a while until they return low in the west around the evening twilight in about a month.

Look on up and smile!

For more sky events log on to: www.astronomy.com and http://space.about.com/od/computerresources/tp/2009MaySkyGuide.htm

You can read other articles and tips by Anna on these websites:

Anna Sanclement writes from home and has recently started to write articles for various Internet sites. She has also finished a novel and has written many stories and a movie script, just for fun. 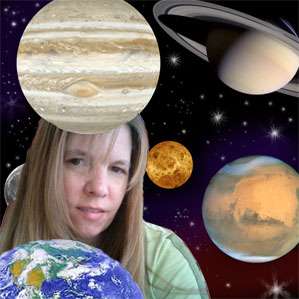