I had the great opportunity to interview poet Judith Viorst from last year’s Miami Book Fair where she presented her collection of poems Unexpectedly Eighty: And Other Adaptations as well as her popular picture book, Lulu and the Brontosaurus which is illustrated by Lane Smith. The first book is about turning eighty-ish and is written in such a refreshing style; blending thought-provoking wisdom and affecting humor into one. The second book is the tale of a young girl named Lulu and her single-minded desire to receive a brontosaurus for a birthday present.

The ability to transcend literary genres between the world of the child and the adult fictional landscape is something Viorst appears to do effortlessly while invoking a magical touch to every page. This well-known author, journalist, and psychoanalyst is best known for writing The Tenth Good Thing About Barney (about the death of a pet) and the Alexander series. Alexander, the five-year-old boy who narrates the series of short picture books {including the famous: Alexander and the Terrible, Horrible, No Good, Very Bad Day} lives with his mother and father and two brothers, Anthony and Nick, all fictional characters named in-honor of her three sons. Viorst has also written columns for The New York Times, The Washington Post, and has worked as a contributing editor for Redbook magazine.

Aroundwellington.com: First of all, your book is beautiful, inside and out. Was the decision for the red cover and book jacket yours or was it up to the publishing company to choose it?

Judith Viorst: We had a lot of back and forth as I didn’t want a lot of images and we spent a lot of time on the red, as I love red, because it’s amazing how many ugly versions of red passed through.

AW.COM: I agree with your comment that failing memory can keep you married. When did this realization first hit you?

JV (laughs): It hit me a long time ago and putting it into practice is more of recent vintage. It seems to me that whenever my husband committed some infraction I could go back to our engagement and recall all similar instances of this kind of behavior ending with a summary to the jury which wasn’t around and my husband saying ‘thank you prosecuting attorney’. And since it wasn’t going over too well I decided a little less meticulousness about all of my grievances would probably do the marriage a lot of good.

AW.COM: Sometimes in life you just have to let things go.

JV: Eventually. Or else, at least, one of my favorite lines is: “Don’t keep score, at least not out loud.” Just keep your mouth shut. (Read her poem: “How to Stay Married” on pages 46-47.)

AW.COM: The way your book is broken down into different categories, EIGHTYISH, EIGHTIER and EXCEEDINGLY EIGHTY is really clever. When you were writing your poems for this book did you have these categories in mind?

JV: No, I didn’t. The categories came later as a general grouping about the sense of; well I am actually Eightyish, seventy-nine and ten-twelfths. I’ll be eighty on February second (2011), so I’m eightyish, but I talked to a lot of people who were eightier than I was and then a lot of people who were exceedingly eighty so it seems to me that one can make these little subtle distinctions. In fact, I also just had my fiftieth wedding anniversary. (Read her poem: “Fifty Years Later” on pages 20-21.)

AW.COM:  Happy anniversary. When was it?

JV: It was in January but we’ve been spending the year celebrating it.

AW.COM: You should. I notice that some of your poems have certain themes, such as politics, marriage and spiritual thoughts. Particularly in your poem “Missing” (pages 26-27) when you write ‘The time will arrive When it’s my turn to disappear, And the world will keep going on,” and more, can you talk about this particular theme and why you chose to write about it?

JV: I also have a poem in their called “Exceedingly Eighty” (pages 44-45) which makes the point that despite all the observations to the contrary, eighty is not the new sixty. Eighty is eighty. A lot more people you love get sick; you’ll go to a lot more funerals. I certainly don’t dress the way or think the way my mother would’ve if she had lived to this day. But despite all that and the effort, the career involvement, the exercise, the volunteer work, travels – we are a lot closer to death at eighty than we were at sixty and to write a book about it, even a funny book of poems called UNEXPECTEDLY EIGHTY, which sounds very cute and light-hearted, you cannot write a truthful book unless you acknowledge the existence of mortality. I have a friend and we were talking about the subject and I said, ‘granted, we all have to die someday’ and she said, ‘who’s granting?’

AW.COM: I want to touch upon the idea of driving at night. (See her poem “Driving at Night” on pages 4-5.) When did you first notice, or do you have this problem? 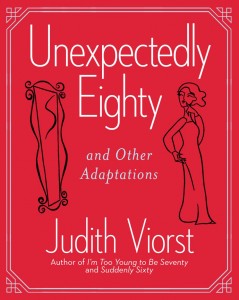 JV: Actually, I’ve had cataract operations on both of my eyes so I’ve greatly improved, but I stopped driving at night because I was really a menace on the road. I still prefer not to drive at night. I don’t think I see as well as I suspect my kids do. One of my favorite stories is about two couples who go to the ballet together. One couple arrived and walked over to the other couple’s house while they were getting ready and found out that all four of them had given up driving at night and they had all counted on one of the other person’s in the party to drive them all to the ballet.

AW.COM: So much for the ballet. Taxi! I do think it’s hard to have the maturity to know when it’s time to say it’s not safe. Do you agree?

JV: Yes, I think it’s very hard. I think it’s much harder for men then women as it is much more tied up to their manhood and independence and needing someone else to drive them; it’s very, very hard. I’ve seen friends of mine negotiate with giving up driving at night.

AW.COM: I know I’ll face this one day.

JV: You mean you’ll settle with living old enough to give up driving?

JV: That’s very mature of you.

AW.COM: (laughs) Thank you. I found this quote that has been given credit to you for saying, “You end up as you deserve.” Is this something that you said, if so, can you explain to me what you meant by it?

AW.COM: That’s a great answer for not actually saying it in the first place. I’m interested in the fact that you studied Freudian psychology. What was is it that moved you toward it?

JV: I went to the Washington Psychoanalytic Institute for six-years and graduated. I went there because everything I write about for grownups and kids, funny or serious, is all about what goes on inside people and what goes on in our relationships with each other and I thought that psychoanalytic theory would provide a rich well of information to enhance what I already knew from reading novels, from talking to people and from looking at my own life and deepening my understanding of who we are and why we do what we do.

AW.COM: Are you still involved with the institute?

JV: No. But I worked as a therapist for two years afterwards, not to change careers but just to see the theory in operation and I taught writing to psychoanalysts for several years at the institute. But now I have too many grandchildren to do that anymore.

JV: Well, my general advice is nothing is written in stone. You don’t have to be terrified when you embark in a career that may make you feel ‘oh my god, I made a mistake and now I’m stuck with it for the rest of my life.’ I was saying this even before articles appeared that seem to now insist that we have three different kinds of careers over the course of a lifetime. But I think people need to know that they can change and grow in ways that will massively shape the kind of work they do. My son Nick who is now very happy as a lawyer {Nicholas Nathan “Nick” Viorst is an Assistant District Attorney for New York County}worked in Hollywood for a production company, worked in New York in publishing, before he found exactly the right work for his life.

AW.COM: Sometimes it takes people awhile to find themselves and what they want to do and there’s nothing wrong with that.

JV: That’s right. And you can enjoy the trip. You can enjoy doing what you’re doing until you decide that’s not what you want.

AW.COM: I want to ask you – the very last poem in your book “Status Report” (pages 62-63), has anything changed in your status report since you originally wrote this poem?

AW.COM: So there’s no update?

AW.COM: (laughs) You’re not? I’m shocked because that’s what I was going to tell everybody.

JV: I enjoyed this very much and it was lovely to meet you.

AW.COM: Likewise and thank you very much.

A Toledo, OH native, a graduate of Kent State, Marla E. Schwartz is a Senior Writer for Miami Living Magazine, a freelance writer for Lighthouse Point Magazine and the a cultural arts columnist for AroundWellington.com Her photographs have appeared in these publications, in many Ohio periodicals, as well as in The Miami Herald, The Ft. Lauderdale Sun-Sentinel and The Palm Beach Post. She has had numerous plays published and produced around the country. Her short play, America’s Working? was produced in Los Angeles at both the First Stage and the Lone Star Ensemble theater companies, in Florida at Lynn University and at an Off-Broadway playhouse in NYC. Her piece, The Lunch Time Café, was a finalist for the Heideman Award, Actors Theatre of Louisville. Please check out the re-prints of her interviews with authors Dave Barry & Ridley Pearson and Dexter novelist Jeff Lindsay in the October 2010 issue #2 and Chris Bohjalian in the April 2011 issue #3 of Duff Brenna’s ServingHouse: A Journal of Literary Arts at www.servinghousejournal.com. You can contact her at marlaschwartz@att.net.

Express Yourself Fashion Art Ball on May 8th