It’s only 40 miles north of Boston, but it feels like it’s a world away. Situated at the northern tip of Cape Ann, the seaside village of Rockport, Massachusetts offers miles of lovely beaches, boulder-strewn paths through woods and meadows, and an uncommonly magical light that has inspired painters since Winslow Homer. Painters weren’t the only ones enticed by Rockport’s charms. Ralph Waldo Emerson escaped here to his now namesake Emerson Inn by the Sea and his friend, Henry Thoreau also walked these streets. Here are just a few of the things that make Rockport one of New England’s great getaways.

From the quarry to the canvas

Rockport has reinvented itself many times. First, it served as a source of timber for neighboring Gloucester. Next, the townspeople turned to fishing. In the 1830s the quarry industry had a successful run supplying granite for such notable spots as the entrance of the Holland Tunnel in New York and the fountain bowls for Washington DC’s Union Station Plaza. When the demand for granite declined, Rockport reinvented itself again, this time as an artist colony.

Attracted by its extraordinary light coupled with breathtaking sunrises and sunsets, artists have been drawn to Rockport since the mid-1800s making it one of the oldest art colonies in the country. Even if you’ve never been to Rockport, you may have seen it in photographs and paintings. Rockport is home to the iconic Motif No. 1—considered to be the most photographed and painted building in the USA due to the unique composition and lighting of its location.

Built in the 1840s just as artists were finding their way to Rockport, Motif No. 1 was an old fishing shack standing at the edge of the harbor on Bradley Wharf. A blizzard destroyed the original shack, but a replica was built and still stands waiting for photographers and painters to showcase its simple beauty. Motif No. 1 also made it into the movies in the animated film, “Finding Nemo,” where it hangs on the wall of the dentist’s office—a tribute by director Andrew Stanton to his hometown of Rockport.

Something for every taste

Strolling the streets of Rockport amid the many galleries and unique shops you’re sure to work up an appetite. And if seafood is what you crave, you’re in the right town. With lobstermen setting their traps in the harbor at the center of the town, the coastal cuisine served in restaurants like Roy Moore’s Fish Shack and Roy Moore’s Lobster Company couldn’t be any fresher.

With a nod to the legacy of the hard-working quarrymen in Rockport’s past, Feather & Wedge takes its name from the simple hand tool and process used in splitting massive blocks of granite. Offering a seasonally changing menu of items sourced from the nearby land and waters, Feather & Wedge is an excellent choice for dinner and a handcrafted cocktail.

Looking for the best fried clams in town? Oddly enough then, you should pay a visit to the local hot dog shop, Top Dog. Best known for its hot dogs all named for dogs, including the Pure Bred and the Golden Retriever, Top Dog is very casual and entirely family-friendly. More importantly, it’s extremely delicious. The hot dogs get the most attention, but the fried clams have won the “best in town” award for five years.

Settle in with Ralph Waldo Emerson

Ralph Waldo Emerson once said, “To know even one life has breathed easier because you have lived, this is to have succeeded!” You can breathe a little easier at the historic oceanfront Emerson Inn by the Sea. In the 1850s when the inn was known as Pigeon Cove, Emerson stayed here often finding inspiration from the sea and the rocky coastline. He returned year after year bringing his family here to vacation. For a bit of literary muse, book the Emerson Room where he stayed. Although other rooms are larger and offer more amenities, the Emerson Room is a favorite of many of the poet’s fans.

The inn overlooks the sea and the Cathedral Rocks at its edge. White wooden rockers line the porch and Adirondack chairs are scattered throughout the grounds providing a front row seat to the splendor of the skies and the sea. Alternatively, you can witness it all from the seasonally heated oceanside pool. The inn also has unrestricted access to local walking paths including the Atlantic Trail, which hugs Rockport’s rocky coastline. Halibut Point State Park is about a 20-minute walk where you can hike to the historic quarry pit. On a clear day, you can see Massachusetts, New Hampshire, and Maine from the point.

When evening falls, the onsite Pigeon Cove Tavern provides the ideal ambiance for a romantic dinner on the covered verandah with views of the night sky.

Whatever you choose to do in Rockport, you’ll find it to be a refreshing escape from the hustle and bustle of daily life. Find out more at rockportusa.com. 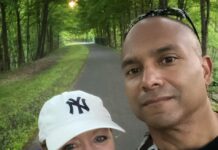 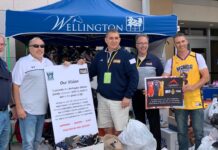 John Sitomer and The Council of Dads