The Radical Camera, A Look at the New York Photo League 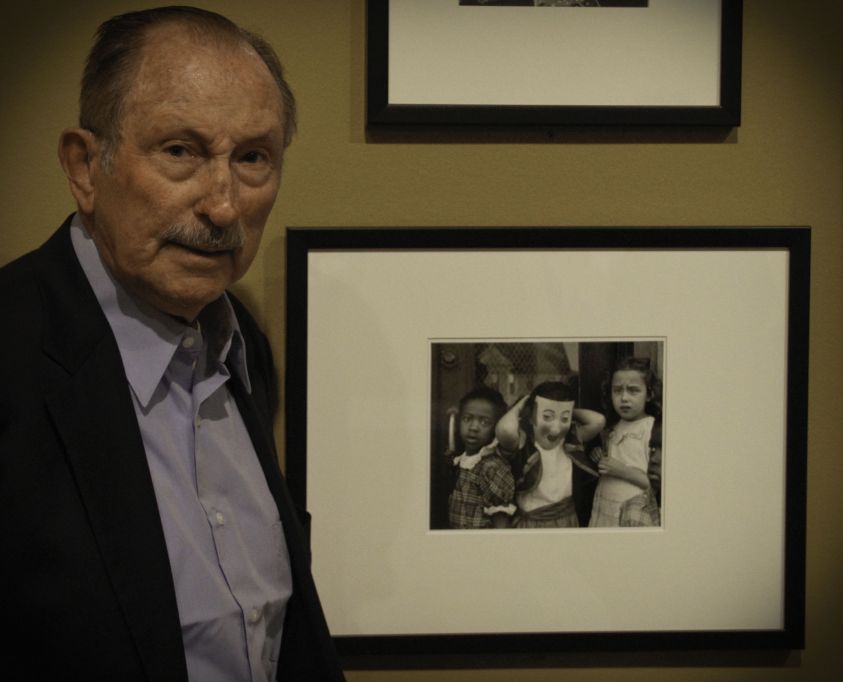 Photographer Marvin Newman next to his iconic Halloween, South Side, 1951. Photo by Eric Baumel.

I quickly glanced at the photo and was immediately drawn to the young girl in the mask. “No not that girl, THAT girl,” said Marvin pointing to another girl on the right. Her brow was furrowed, her eyes open wide and her mouth appeared dirty from, perhaps, Halloween candy. The photo was taken in 1951. Marvin Newman, at a rather sprite 85 years, was a photographer for many publications including Life, Look and Newsweek magazines. His works are included in a special exhibition of 150 vintage photographs, The Radical Camera: New York’s Photo League 1936 – 1951 at the Norton Museum of Art on view until June 16. The New York Times hailed The Radical Camera as a “stirring show.” I must say, I agree.

In retrospect, the New York Photo League enabled many budding photographers to affect social reform. “At the time,” said Ida Wyman, 86, “it was just a place where we could all hang out.” They would meet, share ideas, and take classes from legends like Paul Strand, Lewis Hine and Sid Grossman, an organizer of the league. Grossman taught what constituted a good photograph and the photographer’s emotional relationship to it. “Not only that,” said Sonia Handelman Meyer, 93, “we could use their darkroom for a small fee.” What was the fee? “Twenty-five cents.” Sonia responded quickly with a smile.

Over 1500 photographers passed through the league. It was not a political organization, but there were photographers that wanted to make a statement to motivate the viewer to improve the world through their craft. They inspired a specific look, a poetic technique characteristic of the New York school.

The concept of the New York Photo League reminded me of our local Palm Beach Photographic Center, which offers similar opportunities for promising photographers here in our own county.

When asked what they want the viewer to take away from this exhibit, Ida Wyman responded, “The reality of how things looked, how PEOPLE looked.” Sonia Handelman Meyer stated, “A sense of the times… what people were going through.” Marvin Newman wanted people “To understand that this group had some of the greatest photographers of the time.”

Oh, and by the way, I asked Marvin why the young girl had “that look” on her face. He answered in bewilderment, “I wish I knew. I’ve always wondered, I’ll never know… never know.”

I urge you to see the exhibit yourself and imagine what the answer might be.

Lori Baumel and her husband Eric Baumel live in Wellington and have three grown children. Their eldest, Sam, 26, is a media producer who currently resides in (extremely hipster) Brooklyn, NY. Rachel, 23, and Evan, 21, wrote the Around Wellington “Teen Talk” column in previous years. Eric has practiced radiology in Wellington since 1991. His many talents include artist, cook, photographer and, recently, medical app developer. You can learn more about Lori at www.loribaumel.com and read her blog at www.grownupcamp.tumblr.com.