When people start talking about playing golf in Great Britain, the conversation always seems to focus on those historic layouts in Scotland such as St. Andrews (both the Old and the New Course), Turnberry, Carnoustie, Muirfield, Royal Dornoch, Royal Troon, Gleneagles, and others.  While those courses deserve to be on everybody’s ‘must play’ list, there are a number of great golf courses in England – located immediately south of Scotland — that will satisfy your craving for the classic, British links golf experience!

One of my personal favorites is the Littlestone Golf Club — www.littlestonegolfclub.org.uk — which is located along the south coast of one of England’s more southern counties, Kent.  I played Littlestone this past June.  My memories of the experience are vivid. 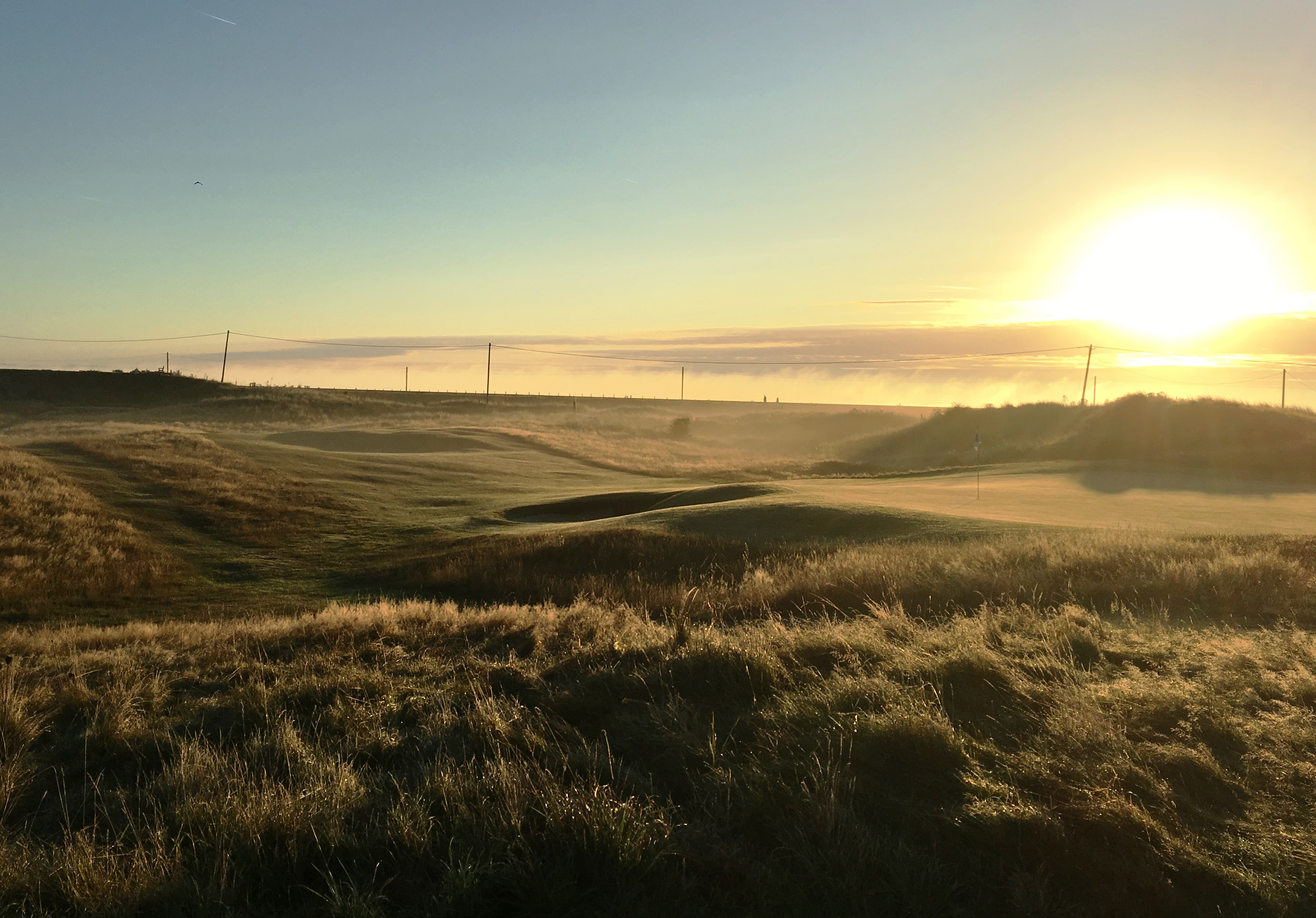 There’s an appeal to playing Littlestone that’s difficult to describe.  The pleasure that one gets by playing golf, especially good golf, at Littlestone is further complemented by the magnificent views of the adjacent English Channel, the nearby white cliffs of Folkestone and Dover, and the French coastline on a clear day.

When golfers talk about visiting England’s county of Kent for golf getaways, Littlestone Golf Club can get overlooked, but it’s a course that deserves as much praise and respect as the other championship links courses in the county — Royal St. George’s (in Sandwich), Prince’s (in Sandwich), and Royal Cinque Ports (in Deal).

While the three aforementioned courses have all hosted The Open Championship, Littlestone is in the same conversation as it has hosted many Open Championship qualifiers.  Littlestone is located about an hour’s drive from the trio of Royal St. George’s, Prince’s, and Royal Cinque Ports…..and is a must-play experience to finish off what is the most enticing tour of championship links golf in the south of England.

If you can imagine what a true links course would play like, Littlestone (www.littlestonegolfclub.org.uk) fits the bill.  It’s a course that is as fun to play as it is demanding to handle.  Even Littlestone’s actual address — alongside St. Andrews Road — is very appropriate for a classic links golf destination.

Opened in 1888, you sense the historic atmosphere at Littlestone, as soon as you step foot on the premises of one of England’s finest and most unheralded championship links courses.

You also can’t help but feel the need to make time after your round for a tour of the old traditional two-story, brick clubhouse which has a slightly weathered, yet distinguished, look to its exterior.  In fact, as you stroll along the grounds and walk around the old brick clubhouse, you can sense the presence of some of the world’s major champion golfers, who have played at Littlestone such as Sergio Garcia, Justin Rose, Darren Clarke, Retief Goosen, Ben Curtis, and Tony Jacklin.

An interesting Littlestone story involves Curtis, who won the Open in 2003, when it was played at nearby Royal St. George’s.  Just prior to that Open, Curtis didn’t have a caddy so officials at Royal St. George’s called Littlestone, which had a member by the name of Andy Sullivan who had some experience as a caddy.  Sullivan agreed to carry Curtis’ bag that week.  That was a smart decision.  In preparation for the Open, Curtis played a practice round at Littlestone.  Less than a week later, Curtis was holding the Claret Jug and Sullivan could say that he had worked for ‘The Champion Golfer of the Year.’

Golfers have year-round access to Littlestone because of the unique microclimate that exists along this section of the Kent coastline, which makes it one of the driest places in Britain.  As a result, the firm terrain produces hard and fast fairways that are beautifully defined by the natural dunes, so typical of links golf.  The temperate weather also means the course is well-manicured throughout the year.  The greens are firm, true and well-paced and have the reputation of being some of the best in England.

At Littlestone, the first and last holes are strong potential birdie opportunities.  As for the other 16 holes, securing par is always a worthy accomplishment.

The degree of difficulty at Littlestone is always impacted by the rough and the wind, which comes whipping off the nearby English Channel.  To say that the rough can be penal at Littlestone is an understatement, so try your best to avoid it at all costs.  Too many of your balls that stray into the rough may never be found, at least by you.  The strength and direction of the wind at Littlestone changes daily.  The wind can change its direction within the course of your round delivering the thrill, joy, and challenge of links golf. 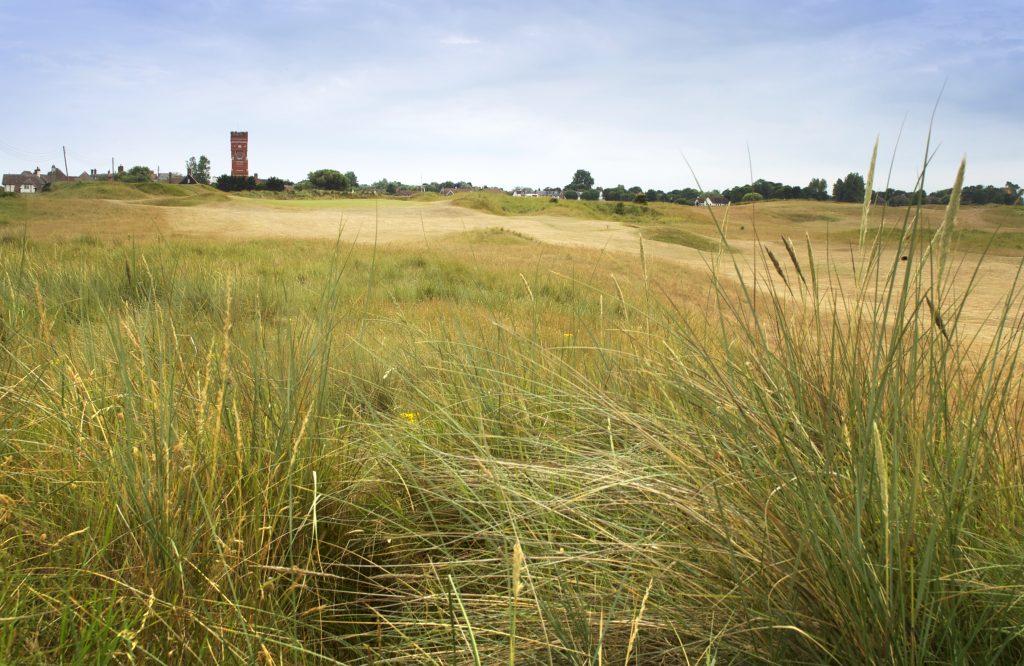 At Littlestone, you’ll find a few inconveniences scattered throughout the premises which add to its ever-present allure and mystique.  I’m referring to fairway pot bunkers; small depressions, known as bowls and hollows; gorse bushes; and many multi-tiered greens with significant undulations.

Because of the steadiness of the wind, trees don’t really exist at Littlestone.

At Littlestone, most of the entrances to the green are bunker free which enables you to land your approach short of the green, thereby giving the ball a chance to release to the pin.

When you walk off the 18th green, you can’t help but immediately reflect on what you just finished – an experience on The Championship Links.  You will have also confirmed that Littlestone is one of the most delightful and hidden gems of championship golf in the south of England.  After golf, head to the clubhouse and enjoy a drink in the bar which overlooks the golf course.  It will give you a chance to raise a toast to The Championship Links and to yourself for having played it.

Bringing Art & Community Together Since 1981. We Welcome All Art Lovers!