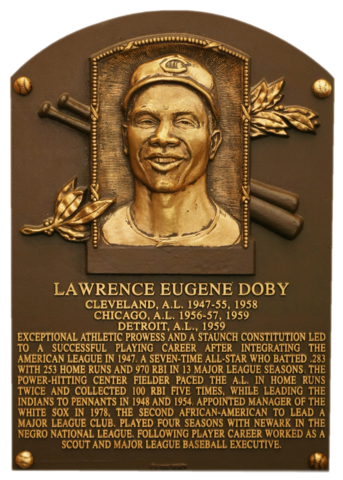 Sports fans will look back on 2020 as the year of interrupted and unfinished seasons, but avid baseball fans will remember 2020 as a landmark moment in time – the 100th anniversary of the Negro Leagues.  Some of the great names in the history of the Negro Leagues have included ‘Cool’ Papa Bell, Buck Leonard, Leon Day, and Josh Gibson, who is widely considered to the ‘The Babe Ruth of the Negro Leagues.’  Of course, there are many blacks who played in both the Negro Leagues and on a Major League Baseball (MLB) team.  Some of those players include Hank Aaron, Roy Campanella, Satchel Paige, Monte Irvin, and Willie Mays.  But, the first two black players to play in both leagues are Jackie Robinson and Larry Doby.

The story about Robinson is well chronicled, as he was the first black player to break baseball’s color barrier when he signed with the Brooklyn Dodgers on April 15, 1947.  In fact, on April 12, 2013, Hollywood honored Robinson with the release of the movie “42.”  Robinson, whose number was 42, spent his entire career with the Dodgers.  The story about Doby, whose career has yet to be told by Hollywood is not so well known, but it needs to be shared.

Less than three months after Robinson broke baseball’s color barrier in 1947, Doby made baseball history by becoming the first black to play in the American League.  On July 3, 1947, Cleveland Indians owner Bill Veeck signed Doby to a contract and two days later, Doby played in his first game for the Indians.  In that opening game on July 5, 1947, he appeared as a pinch hitter vs. the Chicago White Sox, in a game at Chicago’s old Comiskey Park.  In that inaugural at-bat, Doby struck out on three pitches.  While Doby’s first at bat was a strikeout, that hardly symbolized his big league career which was filled with many superlatives, amazing plays, a World Series ring in 1948, and a future induction into Baseball’s Hall of Fame.  It’s worth noting that Doby was the starting centerfielder for Cleveland when the Indians won that World Series in 1948, which is the last world championship, to date, for the Indians. 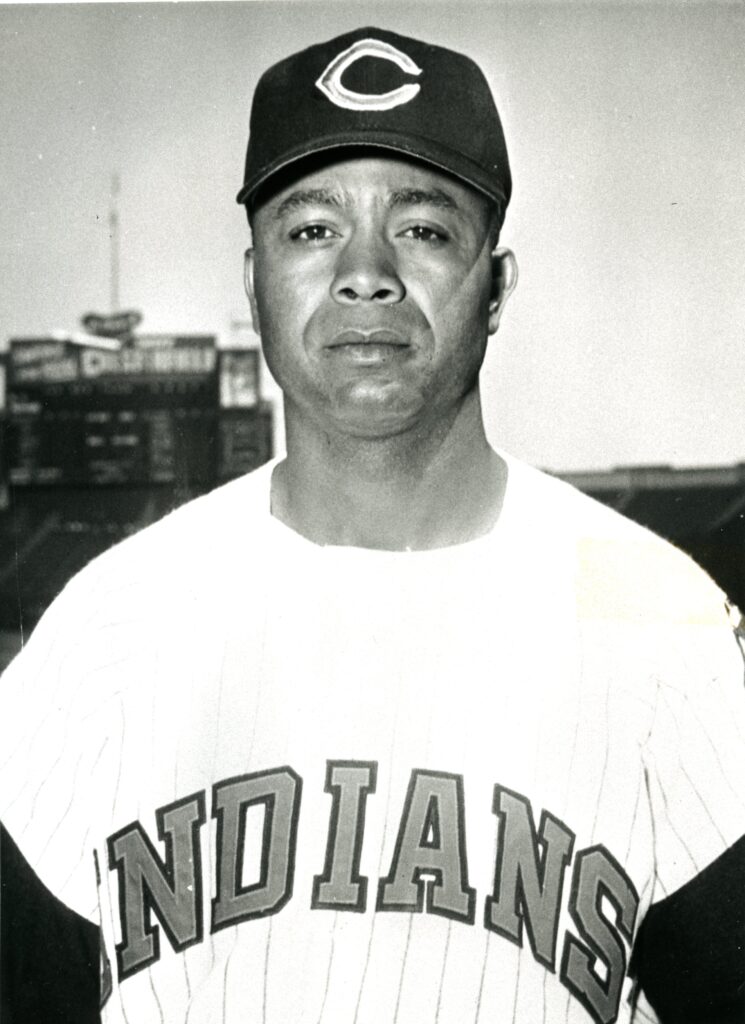 To officially honor Doby (who had a 13-year big-league career, 10 of which were spent in Cleveland), each Indians player wore Doby’s retired number (14) when the New York Yankees come to Cleveland’s Jacobs Field (now Progressive Field) on August 10, 2007. 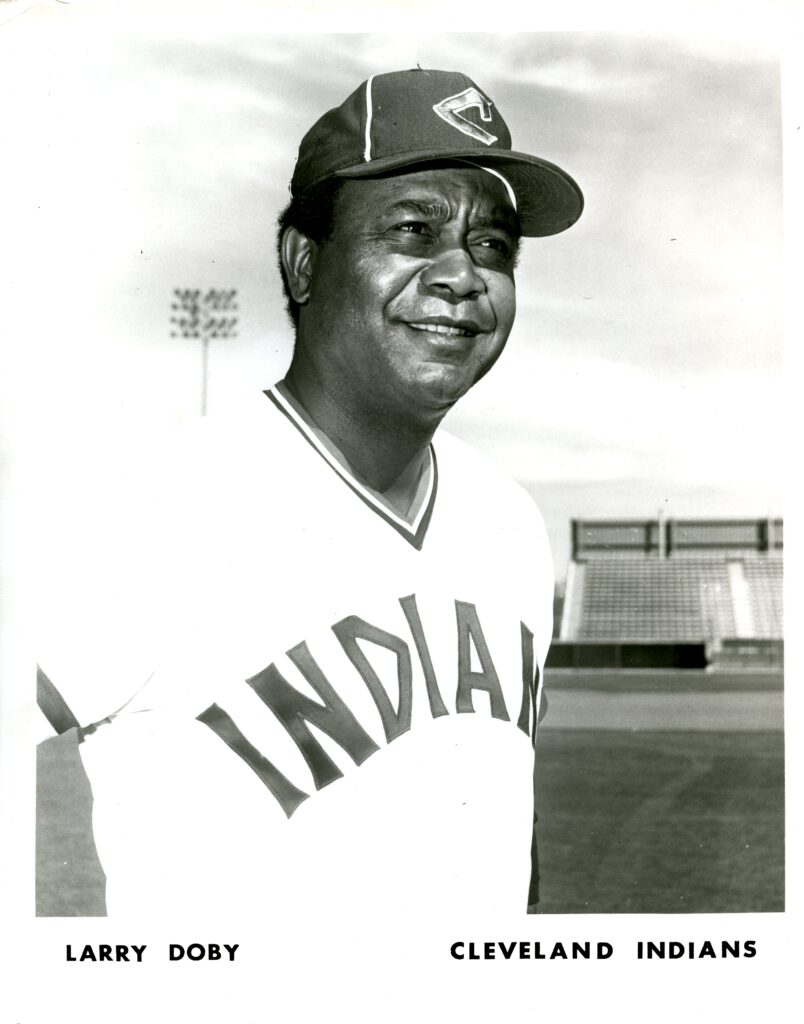 “It’s something that definitely needed to be done,” noted then Indians pitcher C.C. Sabathia, who later pitched and concluded his career with the Yankees in 2019.  “I don’t think a lot of people know anything about him (Doby), but he was definitely huge. You hear all about Jackie (Robinson) all the time, and people lose sight of the fact that Larry was the first black player in the American League.  So he’s as much of an icon as Jackie is.”

Back on August 10, 2007, the ceremonial first pitch was thrown out by Doby’s son, Larry Doby, Jr.

As a child growing up playing baseball, a career as a major leaguer was the furthest thing from Doby’s mind.  In fact, he was convinced that his professional baseball career would go no further than the Negro Leagues.

“I don’t think any African-American thought that he would be a part of Major League Baseball because there was no representation in baseball during the time when I was a kid,” said Doby.

Doby noted that when Robinson joined the Dodgers in 1947, he was in the Navy and living on the little South Pacific island of Ulithi.  When asked if it ever occurred to him that he might be the next black ballplayer to sign a big league contract, his response was anything but vague.

“No, I had no idea,” said Doby.  “There were two major league players on the island at the time – Mickey Verner (Washington Senators) and Billy Goodman (Boston Red Sox).  We used to go out and throw batting practice for each other.  Both of them gave me encouragement because they said that they thought I had enough ability to be a major league player.”

Verner and Goodman were not the only ones who saw potential in Doby, who was one of the star players for the Newark Eagles in the Negro Leagues.  Veeck, who always referred to Doby by his original Christian name Lawrence, was also interested in the young prospect.

“When I walked into that clubhouse on July 5, 1947, I got a lot of resentment from my teammates, but after a period of time they got an opportunity to judge me as to who I was and not on the color of my skin,” explained Doby.

He didn’t begrudge anybody for the cold shoulder treatment because their actions were simply a reflection of the American society at that time.

“During that time, our country was segregated and, of course, hotels and restaurants wouldn’t allow me to sleep or eat there,” remembered Doby.  “Some taxis wouldn’t pick you up.  Those were normal circumstances where prejudices were concerned.  It was a learning lesson for baseball and the country.  If we all look back, we can see that baseball helped make this a better country for us all.”

Despite the difficulties, there were some teammates that gave him instant respect – Jim Hegan, Joe Gordon, Bob Lemon, Bob Feller and Eddie Robinson.  All were very friendly towards Doby.  He says they treated him like a human being and were not interested in his skin color.

“He was a great American, he served the country in World War II, and he was a great ballplayer,” said Feller.  “He was kind of like Buzz Aldrin, the second man on the moon, because he was the second African-American ballplayer in the majors behind Jackie Robinson.  He was just as good of a ballplayer, an exciting player, and a very good teammate.”

“I thought it took a lot of courage for Larry to go through what he did,” said Robinson, Cleveland’s first baseman when Doby first started with Cleveland.  “He handled himself quite well.”

While Doby earned the respect of his teammates, Doby was always indebted to Robinson.

“I had the greatest respect for Jack (Jackie Robinson),” said Doby.  “He was tough and smart and brave.  I once told him, ‘If not for you, then probably not for me.’”

Prior to joining the Cleveland Indians, Doby was a standout for the Newark Eagles of the Negro Leagues.  In 1946, he led the Eagles to the championship, batting .397.  He played second base and was hitting .414 with the Eagles in 1947 before signing with the Indians.

Doby’s first year in Cleveland was a struggle — on and off the field.  On the baseball diamond, he batted a meager .156 in 29 games.

In 1948, Doby’s on-the-field fortunes improved dramatically.  He was the starting center fielder, batted .301, slugged 14 home runs, and drove in 66 runs as Cleveland won the American League pennant and the World Series over the Boston Braves.  In that year’s Fall Classic, Doby batted a team-leading .318 and homered off Boston’s Johnny Sain in the Game 4 victory.  When he slugged that home run, he became the first black to hit a home run in World Series history.

By the time his career ended in 1959, Doby had been selected to six American League All-Star teams, played in two World Series (winning one of them), and had been chosen as baseball’s best center fielder in 1950 by The Sporting News.

In light of the ups and downs he faced during the late ‘40s and throughout the ‘50s, Doby said he would never wish he could swap his career with one of today’s African-American superstars.

On July 3, 1994, on the 47th anniversary of his signing a contract with Cleveland, the Indians retired his number (14).  That number remains on display in Cleveland at Progressive Field.

Many people may be surprised to discover that Doby was also the second African-American manager in the majors, when he took over the White Sox in mid-summer of 1978. He replaced the fired Bob Lemon.  Doby posted a 37-50 record as manager of the White Sox.  The first black manager in the majors was another man named Robinson, former Cincinnati Reds/Baltimore Orioles great (and Baseball Hall of Famer) Frank Robinson.

Plus, during his heyday, he had a chance to play with and against some of the greatest names in the history of the sport – Ted Williams, Joe DiMaggio, Bob Feller, Mickey Mantle, Hank Aaron, Willie Mays in Major League Baseball; and Satchel Paige, ‘Cool’ Papa Bell, Buck Leonard, and Josh Gibson in the Negro Leagues.

Finally, who did Doby think was baseball’s greatest player?

“I’d probably have to put Willie Mays in that category as the best all-around player who did five things (hitting for average, hitting for power, base running, fielding, and throwing) better than most other people,” said Doby.

When Doby died on June 18, 2003, he was 79.  As we reflect on the 100th anniversary of the Negro Leagues, Larry Doby should be remembered as one of trailblazing greats of both the Negro Leagues and Major League Baseball – because he was.

The author of this story is Mike May, a lifelong baseball fan.  May is based in Wellington, Florida.  May met and interviewed Larry Doby in Cleveland, Ohio in August 1996 while both men were attending Major League Baseball’s RBI World Series which was being held in Cleveland.

STICKBALL IS A WAY OF LIFE – WITH HALL OF FAME IMPLICATIONS