Even when faced with the catastrophic losses caused by the postponement of the musical How to Succeed in Business Without Really Trying due to the global coronavirus pandemic, the Theatre has found a way to bring the magic of live theater to its patrons at home. 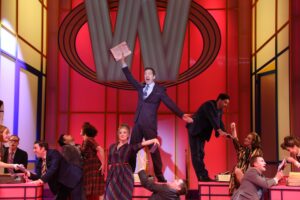 Originally slated for March 17 – April 5, the Theatre is currently working to reschedule the musical for the fall. But as a special treat for its patrons, the Theatre is offering an innovative way for ticketholders to see the musical’s one-of-a-kind performance from the comfort of their couches.

Similar to the 2017 film version of Disney’s Newsies: The Broadway Musical! or the upcoming 2021 film version of Hamilton: An American Musical (which were filmed live on stage and then produced for movie theaters), the Theatre obtained special union permission to film the production.

The musical was professionally filmed live on the Theatre’s stage with a four-camera setup, giving patrons a thrilling and unique perspective of the musical just as it was performed.

“We’re extremely excited to be able to offer our patrons multiple options for how to see the Maltz Jupiter Theatre’s production of How to Succeed in Business Without Really Trying – including the ability to experience theater from home,” said Andrew Kato, the Theatre’s producing artistic director and chief executive. “We want to make sure everyone has a chance to see this spectacular musical, and hopefully this will bring a little joy to our patrons during a time in which they’re unable to visit the Theatre in person.”

The production never had the chance to open; the decision to postpone was determined just as the cast was finishing its three-week intensive rehearsal process, marking a quick turnaround for filming on the day the show had been slated to start previews.

Ticketholders will now have several options to see the show: they can wait to see the musical live when it triumphantly returns in the fall, opt for the film version of the musical now – or both. Those who opt for the recorded version will be provided exclusive access to the performance’s recording through partner Wistia. Ticketholders will receive an email from the Theatre today with directions that explain how to access the recording.

All ticketholders will be provided with the streaming version to watch now through March 29. Since the fall production is effectively a direct transfer to new dates, ticketholders will also be moved into their exact same seats and performance days, then given first priority for a period of time to switch dates as needed. Patrons will be notified of their new dates via letter and email.

The Theatre is just one of countless arts organizations across the nation and world that have cancelled or postponed their events to protect local citizens from any possible risk of contracting COVID-19. As a not-for-profit producing organization, the Theatre has already invested an enormous amount of time and money into the creation of the production that they will not be able to recoup.

Unlike a performing arts center, the Theatre has spent many months building the show from the ground up and has numerous union contracts and obligations to fulfill. Postponing the show is estimated to cost the Theatre at least $800,000, Kato said.

“It is in critical times like these that we need our supporters to continue to believe in our work,” he said. “Like other nonprofit arts organizations, this is very difficult uncharted territory for the Maltz Jupiter Theatre and we are shouldering huge financial losses from this postponement. We’re working around the clock to gain our footing again from this and we would like to thank our patrons for their patience and support.”

For any patrons unable to attend in the fall, the Theatre will provide the exclusive streaming version of the musical to watch now for free and the opportunity to donate their tickets back to the Theatre for a tax-deductible donation letter for the value of their tickets. New contributions are also always appreciated.

While the buildings housing the Maltz Jupiter Theatre’s administrative offices, box office and Goldner Conservatory of Performing Arts are currently closed, staff are working remotely and available via phone and email. To ensure safety and convenience for patrons, the Theatre is now allowing new and renewing subscribers to place their orders over the phone instead of dropping off their order forms in person. Conservatory classes have resumed via an all-new virtual format, allowing students to take lessons from home.

The Theatre is closely monitoring the guidance provided by the Centers for Disease Control and Prevention, as well as local and state public health authorities, to safeguard the health and well-being of its guests, students and staff.

The Theatre’s staff would like to thank patrons for their understanding, patience and continued support during this difficult time. Box office representatives are available to answer questions during regular business hours. The best way to reach the Theatre’s staff is by email; a directory can be found on the Theatre’s website at www.jupitertheatre.org.

About the Maltz Jupiter Theatre

The not-for-profit Maltz Jupiter Theatre has become one of Florida’s preeminent professional theatres, committed to production and education through its collaborations with local and national artists. Currently the state’s largest award-winning regional theatre, the Theatre draws 100,000 people annually, serves a subscription base of more than 8,230 and has world-class classroom facilities in support of its Goldner Conservatory of Performing Arts, which serves hundreds of youth and adults. The Theatre is a member of the prestigious League of Resident Theatres. For more information about the Theatre’s upcoming shows and Conservatory, visit www.jupitertheatre.org.