You should go to Delaware.  I can hear you say “Why?”  That is what I said – until I went.  In just three days in Delaware I played the slot machines, walked the aisles of Air Force Two, watched from an air traffic control tower as Air Force One practiced takeoffs and landings, felt the scars left behind by enemy fire in a World War II plane, visited a historic Quaker meeting house, toured a lightship, climbed a World War II fire tower, stood on top of an Army bunker, met an entrepreneur extraordinaire who had laws rewritten to open a winery, witnessed the production of unique craft beers, held bricks of gold worth hundreds of thousands of dollars, drank a shot from a bottle of rum that spent 300 plus years at the bottom of the ocean and met an Indian chief!  Yes, I said three days.

The logical place to start your explorations would be in Delaware’s capital, Dover.  In 1787 Delaware became the “First State” when its delegates were the first to ratify the United States Constitution.  The document was signed at the Golden Fleece Tavern on Dover’s Public Square, later called “The Green”.  Today this is 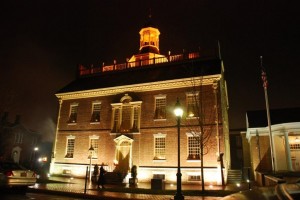 The First State Heritage Park and is Delaware’s first urban “park without boundaries”.   Guided tours are offered as well as many other events.

Another interesting place is the historic Camden Friends Meeting House.  Built in 1805, this Quaker meeting house is still in service.  Adjacent to the historic building is the grave of John Hunn who was responsible for assisting thousands of fugitive slaves to freedom via the Underground Railroad during the Civil War.  John Hunn was the richest man in Delaware but lost all his possessions after being convicted and fined in 1848 by the U.S. District Court for assisting the slaves.

Just outside Dover Air Force Base, the Air Mobility Command Museum began in 1986 with a single aircraft previously rejected by other museums as being “beyond salvage”.  The museum’s Director, Mike Leister, rejected that label and today that C-47A aircraft stands immaculately restored complete with D-Day invasion stripes as it was when it served with the 61st Troop Carrier Squadron in World War II.  It is joined by an extensive collection of vintage planes, photographs, artifacts and memorabilia that reflect the evolution and history of Air Force aviation.  Each item from the largest aircraft to the smallest artifact is documented and painstakingly restored by volunteers – many retired military personnel. The museum also houses the recently retired Air Force Two used for transporting America’s First Ladies and other dignitaries.  Walking through the aircraft  I fully expected to run into Harrison Ford!  An onsite air traffic control tower provides an opportunity to listen in on air traffic in the area while watching aircraft take-off and land at Dover AFB.  With a little luck, you may experience an Air Force One sighting. 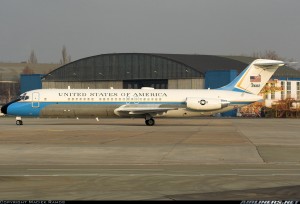 Southern Delaware is a popular beach destination in the summer, but the area’s rich history and unique entrepreneurial culture give it year-round appeal.  As the First Town in the First State, the seaport of Lewes provides some of the richest history in the nation. Discovered by Henry Hudson on a voyage up the Delaware River in August, 1609, Lewes was first settled by the Dutch in 1631.  Here you will find the Lightship Overfalls – one of only 15 remaining lightships.  A lightship is essentially a floating lighthouse serving the same functions as a stationary lighthouse.  Manned by a military crew of 14 who were broken into three sections and worked on a rotation schedule of two weeks on, two weeks off, duty aboard was both lonely and dangerous. The danger stemmed from the lightship staying on station no matter how severe the weather.  The Lightship Overfalls has been completely restored to its original condition by volunteers with an average age of  70 – dubbed the “Dirty Hands Gang”!

Built in 1941 to defend the port of Philadelphia, Fort Miles is a massive coastal fortification. Hike atop a bunker housing a massive cannon used during World War II. If you are feeling energetic, climb the stairs to the top of the fire tower for a view of the spectacular coastline. The top of the fire tower is a popular place for marriage proposals. The man writes “Will you marry me?” with twigs on the ground at the base of the tower before inviting his lady for a hike to the top.  Of course, he is risking rejection if his lady love is not a fan of stair climbing for diamonds!

The Nanticoke Indians were in Delaware before it was Delaware. Today the history of this tribe is preserved in the Nanticoke Indian Museum. This place of discovery is filled with thousands of arrowheads, stones, pottery, axe hammers and other cultural artifacts. The tribe’s symbol is the turtle which was used to determine the cycles of the moons.  A turtle’s shell has 13 sections (or squares) representing the 13 full moons in each year and 28 notches around the edge representing the days of the moon cycles!  It seems we can learn a lot from the Indian tribal cultures.

Further down the coast in Fenwick Island on the second floor of a pink building above a sea shell shop is the Discover Sea Shipwreck Museum. Dale Clifton, Jr., Director, says each time a ship sinks time stands still.  Dale has spent the past 30 years exploring these underwater time capsules!  This continuously evolving exhibit includes only 10% of his collection with the remaining 90% on loan to museums around the world.  I held gold bricks stamped by the King of Spain and viewed photographs perfectly developed from a camera which sank aboard the RMS Republic – the pride of the White Star Line prior to Titanic.  Dale’s collection includes 30 bottles of rum discovered in the wreckage of a fleet of Spanish ships which sank in 1733.  When the bottles were discovered in the 1990’s, 18 of them were still sealed and drinkable – worth around $20,000 each!  Testing proved these were not ordinary bottles of rum.  The rum was originally bottled for the British Navy and was pillaged from the British fleet by the Spanish prior to the sinking of the Spanish fleet.  When the rum was bottled in 1730,  the distillery lined the bottom of the bottles with coconut fiber, added 145-proof rum up to the base of the neck and filled the remaining space with water and two tablespoons of lime juice to prevent scurvy – hence the expression “he’s a limey”.   Dale offered (and we did not refuse) a shot of the rum – literally drinking a shot of history!

Speaking of spirits, when Peggy Raley decided to begin producing wines Delaware’s law prohibited the production and resale of alcohol.  Peggy drafted legislation and lobbied the Delaware General Assembly to create the Farm Winery legislation for the state.  The law passed in 1991 and Nassau Valley Vineyards opened in 1993 as the “First Winery in the First State”!  Peggy’s efforts paved the way for all other Delaware breweries and wineries.  Thank you, Peggy.  Nassau Valley Vineyards produces award winning wines from estate grown grapes along with other high quality fruit sourced from local and regional growers.  The onsite museum chronicles the 8,000 year-old history of wine.  Sample the fruit of the vine and enjoy a picnic on the pastoral grounds of the property. 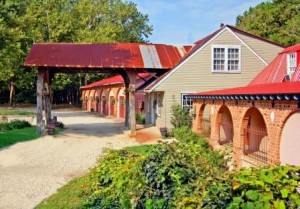 If rum and wine are not enough for you, check out the Dogfish Head Craft Brewery in Milton.  Dogfish Head started out as the smallest commercial brewery in America brewing its first ale on three little kegs with propane burners underneath.  Today it is one of Delaware’s most popular brews. The creative brews developed by creative people with a very creative tree house on property for meetings is best understood by a tour of the brewery followed by samples of the brews.  Of course.  By the way, if the cows in Southern Delaware seem particularly happy you can thank Dogfish Head Brewery. The grains used in the brewing cycle are recycled and delivered to local farmers to be used as feed for cattle.  When the truck from Dogfish Head appears – the cows come running!

Where to stay?  In Dover, check out the new Hilton Garden Inn property. Its convenient location coupled with comfortable beds and all the amenities you need at a reasonable price makes it the perfect home base for your Dover explorations.

Go to and to plan your Delaware discovery!