Experience the Magic of Trains in Strasburg, Pennsylvania

There is something magical about trains.  I remember when I was a child in the 1960’s how much fun it was to wait for a train to pass so that we could wave at the man in the caboose!  “Choo choo’s” seem to have a special attraction to children – young and old – and there is no better place to enjoy the history and magic of trains than in Train Town, U.S.A. –  Strasburg, Pennsylvania!

Located in the heart of the scenic Lancaster County countryside amidst rolling hills, picturesque farms and the fascinating Amish community, Strasburg has been experiencing the magic of the railroad since Colonel John Stevens from Hoboken, New Jersey first came to town in 1823.  Colonel Stevens came by horse-drawn coach because there were no railroads in America at the time.  He came with a dream of developing a railroad system to connect the nation in a way previously never seen.  His ideas eventually became reality and Strasburg Railroad was established under a charter in 1832.  Later in 1842 under a new charter, the Pennsylvania Railroad consolidated over six hundred smaller railroad lines to become a giant among American railroads.  The railroad’s main line passed through Paradise, Pennsylvania at a place called Strasburg Junction! 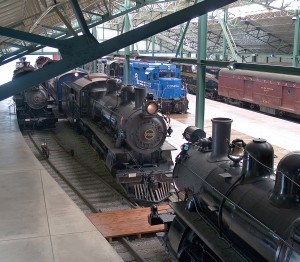 nnsylvania located on Route 741 just east of the town of Strasburg.  The museum has over 100,000 square feet of indoor space to display its historically significant collection of locomotives and railroad artifacts. A restoration yard and shop is located outside the museum allowing visitors the opportunity to witness the process of bringing these beautiful old engines back to life. The museum is a tribute to the history and importance of the railroad industry and appeals to young and old alike with a variety of exhibits and activities.

At the Young Railroaders Discovery Center within the museum, young railroad enthusiasts experience a variety of activities designed to educate and entertain through contact with model and real trains. The museum also offers special events throughout the year including the popular circus weekend – a tribute to the special trains of the circus!

Old timers enjoy the nostalgic experience of seeing familiar locomotives from their past.  Visitors get an up close view of the locomotives providing a glimpse of the magnitude of these great machines.  There are archives of railroad records, memorabilia, railroad artifacts and even a simulator where you can try your hand at the controls!

The museum’s “Railroaders Hall” was established as a place to honor the men and women who have built, operated, maintained and managed America’s railroads of all types over the years.  There are individual plaques honoring over 2200 railroaders and the roll continues to grow.  The museum has something for everyone whether or not you consider yourself a railroad enthusiast!  http://www.rrmuseumpa.org

It is great to learn about trains and the railroad industry but even better to ride one!  Directly across the street from the museum is the Strasburg Railroad where you 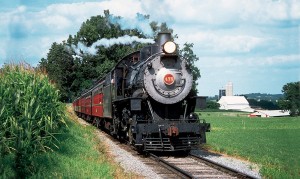 can climb aboard America’s oldest short-line railroad for a ride through the Amish countryside.  Strasburg Railroad is recognized as one of the country’s most significant examples of early 20th century railroading and is one of Lancaster County’s most popular tourist attractions.  The railroad offers a number of special events throughout the year including lunch and dinner trains, a Wine and Cheese Train and various holiday events.

If you have any young railroaders in your life you are no doubt familiar with Thomas the Train!  This really useful engine and his friends from the Island of Sodor continue to teach and inspire children of all ages with valuable life lessons of friendship, responsibility and imagination.  Even Thomas the Tank Engine has to leave the Island of Sodor from time to time and when he does, he often visits the Strasburg Railroad for the popular family event “Day Out With Thomas”.    http://www.strasburgrailroad.com

Back in 1945 George Groff returned from World War II and began a search for a special Christmas gift for his two-year-old son, Gary.  He bought a Lionel train set for $12.50 and set it up in the family basement in their Strasburg home.  Over the years the train display continued to grow and eventually became too large for the family home!  On Thanksgiving Day in 1961 George and Florence Groff opened The Choo Choo Barn with over 600 square feet of detailed landscaping, 6 trains and 6 animated figures.  The Choo Choo Barn was instantly popular with locals and visitors and continued to grow over the years.  Today there are over 150 hand built animated figures and vehicles on display along with 22 operating trains in 1700 square feet of space!  http://www.choochoobarn.com

Strasburg is also home to the National Toy Train Museum.  Housed in a building designed to replicate a Victorian Era Train Station, the National Toy Train Museum contains one of the most extensive toy train collections in the world!   The collection includes trains children have pushed, pulled and ridden over the years along with a collection of miniature trains built to the scale of the full sized trains they represent.  http://www.nttmuseum.org

If you are going to spend your days in Strasburg learning about trains, riding trains, enjoying the displays of 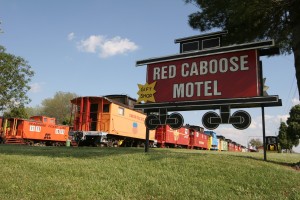 model trains at the Choo Choo barn and operating displays at the National Toy Train Museum, why not sleep in a train too?  In 1969 – in response to a dare – Don Denlinger bid $100 on 19 old cabooses which were being auctioned off by the Pennsylvania Railroad.  He won the 25-ton cabooses and moved them to 9 ½ acres of land in the Amish countryside near the Strasburg Railroad.  The cabooses were transformed into motel rooms and the Red Caboose Motel was born!  Today’s owner, Larry Demarco, has restored and repainted the cabooses to reflect the authentic colors of the railroads they represent.  There are 46 sleeping cars, dining and on-site family activities.   The Red Caboose has been mentioned in the Guinness Book of World Records for the most singly owned collection of cabooses.  What a unique way to complete your train themed family vacation!  http://www.redcaboosemotel.com

This article is dedicated to my favorite railroader, Gregory Holder, who drives the New York City subways everyday and who has helped me develop an appreciation for the railroad beyond my initial fascination with the man in the caboose!  When you visit, look for Greg’s name in the Railroaders Hall at the Railroad Museum of Pennsylvania! 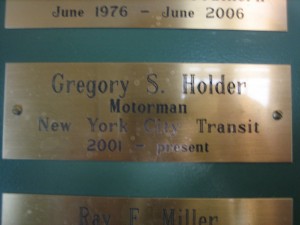 Terri is a freelance writer with regular columns on travel, chocolate and bar reviews. She is busy each month visiting new places to bring unique travel destinations and events to you. Yes, it is a sacrifice – but she is willing to do that for her readers! You can see more of Terri’s writing at www.examiner.com where she is the National Chocolate Examiner and at www.barzz.net. You can contact Terri at terri.marshall60@gmail.com