I recently saw a T.V. show that featured an electronic cat called Robo-Cat that is equipped with touch sensors that let it engage in such real-life feline behavior as purring, moving its legs when you stroke its belly, and sleeping a lot. It will not, as far as I know, scratch your face, bite your toes, as Berkel enjoys doing, or even bother catching mice.

For cat lovers who dread the tedious and smelly job of caring for a litter box, having a second cat with electronic innards sounded like a splendid idea. I thought I’d tell my cat Berkel about it.

“Berkel,” did you happen to catch that T.V. show that featured an electronic cat called Robo-Cat that does everything you do… except poop?” 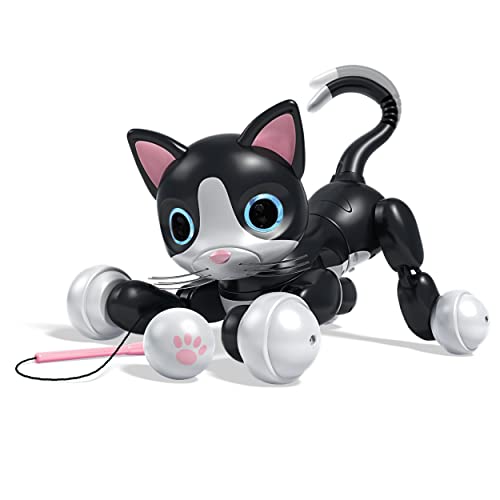 “No,” said Berkel, “but I saw a T.V. show that featured a life-like robotic man that does everything you do… except beat his cat over the head with a broom, and chase him around the house with the vacuum hose!

“But that’s the only way you know how to listen to me. Why don’t you learn how to listen, instead of talking back at me! I begged.

Berkel took a moment to scratch his ear and said, “Sorry, I think I have wax in my ear. I didn’t hear a word you said. And, by the way, on T.V. I recently saw an electronic, life-like woman called Robo-Chick that its creator said has almost everything a real woman has, but wears a special mute button to stop her from talking back. Didn’t you tell me you wish your lovely Felicia had a mute button, so you could turn her off when you’re watching football?”

“Yes indeed, I did say that. You see, for a man to be able to enjoy a football game, it takes a certain degree of concentration that women have trouble understanding. This would be the perfect time to have a Robo-Chick in my life with a mute button.”

“I thought that would be of interest to a man who is supposedly in full control, but close to adding a straight jacket to his wardrobe.” Berkel replied.

At times like these, I picture Berkel in the microwave oven, peering out the little window, pleading for forgiveness. But I’m a rational man, and perhaps Berkel may be right. Maybe this was something I should at least ponder. A football game without interruption would be a dream come true! I remember one time when the Giants and Green Bay were tied in the last minute of a playoff game and the Giants were about to kick a 60-yard field goal when Felicia came in the room singing an ungodly version of Happy Birthday.

Unquestionably, Felicia possesses, let’s say, the proper parts placed perfectly in the proper places, therefore I was quite happy and satisfied with the visual part of our relationship. But as she entered the room holding the cake and singing, it was like a stupendous verbal tsunami had struck me in the chest and left me desperately gasping for air and praying I’d die quickly.

Well, to my misfortune, I missed seeing the record-breaking kick, as Felicia stepped in front of the T.V., singing with a voice, unlike Marilyn Monroe, but more like someone running their fingernails across a chalkboard. Now, if Felicia didn’t rate a mute button at that moment, nobody did.

Berkel paced the room waiting for an answer. “So, tell me, are we going to resolve this hair-brained Robo-Cat scheme of yours, because I’m losing my patience?!” Berkel shouted.

Berkel and I rarely agree on anything, so this was hardly an unexpected discourse between us.

“Listen, don’t take this personally, Berkel, but I’ve been toying with the idea, just toying you understand…”

“Oh, about purchasing a robo-cat? Is that what this whole conversation is about? Am I going to be replaced by a pointless, puny, poopless piece of…”

“Easy, easy, my loyal friend. I was just planning a 30-day trial period with the Robo-Cat that I would name ‘Herkel,’ and in this way you’d have Herkel for company and I’d have Berkel and Herkel to keep me company. You would have a wonderful 30 days to get acquainted,“ I explained.

“Acquainted? You expect me, a real live cat, to be commiserating with a heartless, bloodless, battery-operated, mechanical bunch of electronic gadgetry?

“It’s the way of the future, Berkel! Don’t fight it. Embrace it. Computers will some day rule the world and make all the decisions for us. You and I are just like bits of sand, swept up in a storm of progressive thinking. Soon, we will have no names, just numbers. No telling what fate is in store for us. There’s no ‘somewhere over the rainbow.’ There’s no magic potion. We are doomed.

Berkel smiled and said, “What do you say pal, let’s get a pizza and watch some football.”

In Life – Everything is Negotiable

Don’t Leave the Catnip Out!